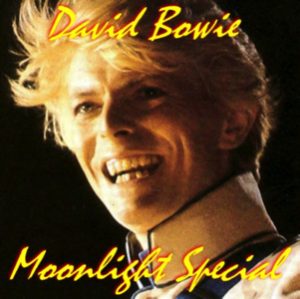 The David Bowie Serious Moonlight Tour was thus far Bowie’s longest, largest and most successful concert tour. The tour opened at the Vorst Forest Nationaal, Brussels, on 18 May 1983 and ended in the Hong Kong Coliseum on 8 December 1983; 16 countries visited, 96 performances, and over 2.6M tickets sold. The tour garnered mostly favorable reviews from the press.

Tour development
Bowie himself had a hand in the set design for the tour, which included giant columns (affectionately referred to as “condoms”) as well as a large moon and a giant hand. Some of the musicians from his 1978 tour were re-hired for this tour, including Carlos Alomar, who was the band leader for the tour. Earl Slick was drafted as guitarist a few days before the commencement of the tour due to problems with Stevie Ray Vaughan’s management demanding a contract renegotiation.
The band rehearsed for the tour in Dallas, Texas. Each band member wore a costume which was designed “down to the smallest detail.” Two sets of each person’s costumes were made and worn on alternate nights, and everyone got to keep one set at the conclusion of the tour as a souvenir.
One song that was on the rehearsal’s song list that never actually got to the rehearsal stage was “Across the Universe,” which Bowie had covered in 1975 on his Young Americans album.

Tour performances
Earl Slick November 1983 during the Serious Moonlight Tour
On 30 June 1983 the performance at the Hammersmith Odeon in London was a charity show for the Brixton Neighbourhood Community Association in the presence of Princess Michael of Kent. The 13 July 1983 Montreal Forum performance was recorded and broadcast on American FM Radio and other radio stations worldwide. The concert on 12 September in Vancouver was recorded for the concert video Serious Moonlight, that was released in 1984 and on DVD in 2006.
At the Canadian National Exhibition Stadium – Toronto, ON performance on 4 September 1983, Bowie introduced onstage special guest, Mick Ronson, who borrowed Earl Slick’s guitar and performed “The Jean Genie” with Bowie and band. Mick had only been asked to play the day before, and he later recalled:
I was playing Slick’s guitar … I had heard Slick play solos all night so I decided not to play solos and I just went out and thrashed the guitar. I really thrashed the guitar, I was waving the guitar above my head and all sorts of things. It was funny afterwards because David said, ‘You should have seen [Earl Slick’s] face…’ meaning he looked petrified. I had his prize guitar and I was swinging it around my head and Slick’s going ‘Waaaa… watch my guitar’, you know. I was banging into it and it was going round my head. Poor Slick. I mean, I didn’t know it was his special guitar, I just thought it was a guitar, a lump of wood with six strings.
The last show of the tour (8 December 1983) was the third anniversary of John Lennon’s death, whom both Bowie and Earl Slick had worked with in the studio previously. Slick suggested to Bowie a few days prior to the show that they play “Across the Universe” as a tribute, but Bowie said, “Well if we’re going to do it, we might as well do “Imagine.”” They rehearsed the song a couple of times on 5 December (in Bangkok) and then performed the song on the final night of the tour as a tribute to their friend.

Tour legacy
The tour was a high point of commercial success for Bowie, who found his new popularity perplexing. Bowie would later remark that with the success of Let’s Dance and the Serious Moonlight Tour, he had lost track of who his fans were or what they wanted. One critic would later call this tour his “most accessible” because “it had few props and one costume change, from peach suit to blue.”
Bowie later specifically tried to avoid repeating the formula for success from his Serious Moonlight Tour with his 1987 Glass Spider Tour.