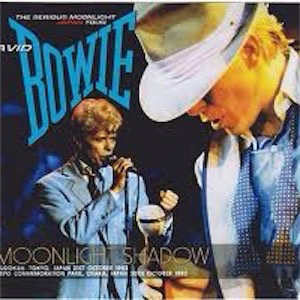 info from Giginjapan
“Why, this is what a CDR release rather than the press?” “This recording is what is going on? Terrible too!” Such a voice appeared ultra-high-quality audience recording title of inevitable angry waves be ejected from the collector field. Smash hit of “LET’S DANCE”, even the movie “Merry Christmas”, exactly is the third time Japan tour which took place in the popular heyday in Japan from “serious Moon Light Japan Tour” , and October 21 Budokan performances of Tokyo second day, the live at the end of October 30 Osaka Expo festival square, respectively, each full inclusion in the ultra-high sound quality that is comparable to the line recording. 1983 Japan tour to reflect the enormous popularity at that time, large-venue just are bear overcrowded schedule of 12 days 10 performances, that the present set of four sets to enjoy the performance of the early and late in the highest sound quality It will be. Recording who Clapton, Jeff Beck, Floyd, Genesis, and Mick Jagger, by Kitai name taper recorded the stage of the 80s and 90s at a phenomenal ultra-high sound quality. This title has been recorded in outstanding sound that will be located at the top among them. Budokan performances, probably because of the day of the PA, but the first half of the concert what is a normal high-quality sound, and we are transformed into increasingly fierce just exquisite sound, such as disk 2 was especially recorded the second half of the show is almost like a sound board ! And that it is not mean that to say the exaggerated, you know if you can listen. The Jean we understand also the intro of the Genie, and to direct as musical tone is line recording, it is possible and that cheer is heard spread in the distance as the “Wow”, this is equivalent before, perhaps to fix the microphone in the front row I think than was recorded. And, it is really amazing the Osaka performances! ! Osaka Osaka Prefectural Gymnasium performance is carried out on October 26 and 27th this day will be to the fact that Osaka third day of across the Nagoya performances. Osaka Expo festival plaza this day that was held in live, as you have heard in the news at that time, in the middle of a concert, live stampede occurred, which was the commotion that the injured people out in the frenzied audience. All standing concert at the outdoor plaza of the day without a seat. Although it is not in the Budokan, and whether this also, was recorded doing what on earth where? And you are listening to has been recorded in great sound that becomes filled with question marks. (This in, how?) As it is also in historical fact, interrupting the performance Bowie who viewed crowd became stampede in “Heroes” in the second track is in the intro. “Please! DOZO! BACK! BACK!” And Bowie blast. Moderator I will do appeared announcement there. “Well, in the hope of from Bowie, now, I have everyone very come before, and I’m very dangerous state. So, I you, please fell behind two steps three steps. If you do not, show you do not start You liked this, Bowie since. very front of the state is dangerous, to watch from that over the stage, because liked very Bowie also unpleasant! (amazing representation!) … So, everyone, Spacious Look at the concert in the mood. this kind of style I, Bowie next to the organizers who cry and are not doing so! “in Japan’s surplus with the” DOZO “comment. Real voice part that counted in the Heroes to re-start of Carlos is a strangely impressive is also splendor of its sound. There is also the announcement of “Please sit down” again organizers after the middle White Light / White Heat of the show, but the organizers spree rush, unexpectedly indifferently comparison with the Bowie side progresses awards to professionals There is something quite interesting. Although such a happening is, show itself is really nice, the sound quality, including, it is performance that would sincerely impressed. Does this sound source is just how amazing! People anxious try to listen in the shop. Agony is the emergence of the inevitable super sound source title! !

It should was “Let’s Dance” life of the undoubtedly 1983’s until now, even before the penetration rate in the living room selling is David Bowie was higher even after. To would already be many people from still around here knew the name of Bowie is now a lapse of nearly 30 years, because people would also be many that came from the flow of even a generation nephew rear Eitizu, also this maximum in fact it reckoned age because time that had become the pop star said. Of course it would and those who prefer the ’80s Bowie musical listening to the listener and follow-up of in the listeners of the’ 70s Bowie and since the 1990s Bowie from the previous Maybe not many, but still already retired state as it were from Bowie of the current situation that has become, and to would be appropriate age as a pop icon of the 80s is re-evaluated, also I think the achievements of the boot leg is greater in that sense. Should also many listeners who will recognize the existence of new ’80s Bowie presence every time by the label is willing to release in the past few years in the over with a good quality sound live bootlegs of 80s of several. And now, finally came out in Japan live at once two shows minute by probably will be first appearance source, including the boot leg and underground source ultra-high quality audience recording from the performances, Budokan and October of October 21 30 It’s performance in Osaka of Japan. Japan performances this year have been made 10 performances, but, but Budokan performances of October 20 to the analog era has ever been released and is full set recorded in stunning sound quality, Osaka performance of October 30, is that only the relationship on the first half of the recording were the focus of most of happening center had been released. Sometimes here in Osaka performance it was or been released even a CD-R, is in the items are somehow known but Budokan first day performances of the 20th despite the goodness of its sound quality, could not find the release of a CD . Release in CD-R may be somewhere. Other Japanese performance Yokohama Stadium live of October 25 by release situation also this some years ago that startle excavation source of but called the topic is released under the master quality from Trial label, perhaps there 10 performances Japan’s performance in were released in the boot leg was it would so much of things. Since between mania are distributed in a fairly good audience source also all performances, it is enough to be accustomed to the mind “10days” make. Too But unfortunately in 1983 of Bowie live are small in the adult number of package bands, the pattern’s show itself of the perfect pop star as seen any official video “Serious Moonlight”. Change in less show itself even listening to any performance thanks to not missing, it becomes a situation that items that do not remain only as a record of on mere history increases. First of its kind this item, which was released this time as a sound source source, yet so far in the high-quality sound of Budokan performances of October 21 that has not been released in the boot leg up here, and performance in Osaka on October 30th a full set recording from another sound source from the source that had been excavated in the past, here also become a selling because astounding high-quality sound. If previously, but probably it had been sold as a single performance that naturally rose, as soon as happy if you inexpensively because be released from course listener as 4CDR even performances of doing such first fruits is now of age So, enjoy enough. Enjoy while always from the beginning of the Budokan performances of 21 days in the introduction of Bowie in Japanese by Carlos Alomar, it’s what all service spirit strong show starts. When it comes to Osaka park also charm of sandwiching a subtly Osaka dialect as “Ookini”. Well, Budokan performances but has finished in matching or of course a stable live even say that the second day of the show, it would and it feels a little quietness listening compared with one of the Osaka performances. As we were changing the words was the show in really cool stance in Tokyo, and you might also say. And On the other hand Osaka performances Bowie gone been flooded before the audience, as is handed down still is occurring happening is that stop the show. 1 but Abunagena state is pretty excited about from the time of “Look Back In Anger” of the piece of music he heard in this source, starting with “Heroes” in the second track is immediately its happening occurs, it is once stopped playing It is something that. Quite vividly hear this happening in a rare thing among certainly hear all the live of Bowie, much whether the Osaka audience was excited, I do not know still what the posture of the audience facing the live was immature, somehow in Osaka I feel is a prize that person has entered the heat has been waged. The thing is grateful to be able to hear vividly the 1983 show vividly in so much high-quality sound in any event.