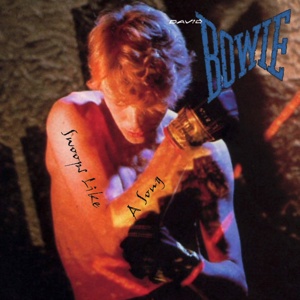 After the deatenlng applause following Space Oddity Bowie imitates the audience for a while,screaming just as hysterically! Quite funny; the audience laugh and their cheers become even louder. “Thank you very much indeed, Thank you very much” Bowie thanks them, This is the last of four con­secutive concerts in Philadelphia,where he has played no less than 26 times in the period of 1972-1983! Philadelphia is among Bowie’s favourite cities; he has always felt close to it and it has one of the highest numbers of Bowie-fans. He had been looking forward to those concecerts in the Spectrum . For a short
while Bowie gets quite emotional,saying in a tiny voice: “Okay Philly…..I knew I’d come back here & play”. When introducing the band he commits an error: “On synthesizers and guitar hahaha,guitar! – keyboards David Lebolt”!