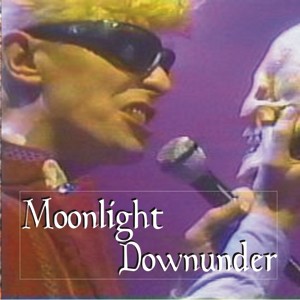 Fighting galore
Bowie was in the right mood for this concert,he joked with the banu and was quite gay – it was a real good concert,and the audience were calmer and less agressive than the night before. Yet,the area near the stage remained a hazardous place. This tape was taken from there: as early as Look Back in Anger there is fighting galore: “Get out of there” a man screams, “fuck off!” someone else. There is so much screaming and yel­ling that it,almost drowns the music. “Don’t hit me,for God’s sake,don’t hit me!” a man is yelling hysterically (and I mean: hysterically!) as if he feels his last minute has come. It is not known to me whether this person has survived.
“Terrific” Bowie calls out after Space Oddity. “You’re lovely. Very sad to say that this is the last gig of our Aus­tralian tour and we can’t say how much we’ve enjoyed it. It’s been very good and we are coming back”.“Yeaaaaah!” the audience reply,and after the band intro: “And YOU! So what are your names. All at once … one-two-three” which is followed by a confusion of 30,000 tongues!
At the beginning of Stay,just when Bowie starts singing, something happens: the musicians are not in harmony,and for a second they don’t know what to do. One fears they must stop and start anew,but it is not quite as bad as that; it’s ama­zing how quickly they recover!