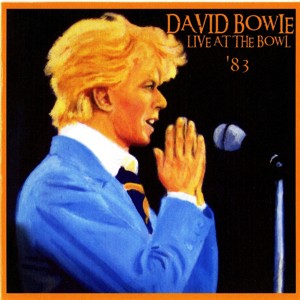 Label : No label
Audio Source : audience
Lineage : 3rd Gen. tape
Total running time : 1:54:28
Sound Quality : noise ,dull ,but still good listened to
Attendance : 58.300
Artwork : Home made ,I decided too use its front cover for the cd artwork, with that superb draw (from a girl called Karina, who’s that girl ???) of Bowie live (in Rotterdam).

Fine atmosphere:
A good concert and a fine atmosphere. There was only some unrest among those at the foot of the stage and after announcing Breaking Class Bowie asks them to remain calm. “This is a song from the album Pinups and it’s called Sorrow“ and before China Girl he says: “Come forth Cinderella. Well,I suppose I’ll have to sing about China” (?).
At the end of the concert a girl can be heard to roar with such a catching laughter,onc cannut help laughing too!

Notes :
This is another one of my tapes I transfered to cd, a 3rd generation one…
I chose to dedicate it to the late Pimm Jal de la Parra who died in 2002 : his book, ‘The Concert Tapes’ has been the absolute bible for every Bowie fan collecting live tapes for years, and therefore for me !!!
I still read it with passion after all these years, a great book, a real must have…

Pimm wrote concerning that show :
“A good concert and a fine atmosphere. There was only some unrest among those at the foot of the stage, and after announcing ‘Breaking Glass’, Bowie asks them to remain calm…”