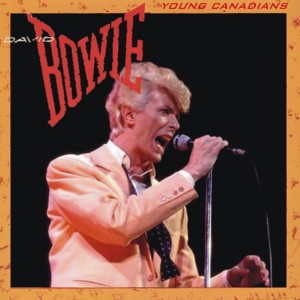 Label : From The Hunky Geordie Tapes – HUG121CD
Audio Source : audience
Lineage : TDK SA90 tape (Arcorman)
Total running time : 1:32:49
Sound Quality : Much noise ,dull ,but still good listened to
Attendance : 14.400
Artwork : By steve23yh
Note : The audience were absolutely hysterical and enjoyed every minute of the show they had already heard so much of.

The heading in the ‘Journal de Quebec’ ran: ‘Les fans de Bowie au 7e ciel’,and not without reason. There were 15600 people, the largest number ever seen together in this hall. “Tt’s good to be back in Canada again” Bowie says,and after having announced the band in French,he says “This is called Young Cana­diens”: instead of the well-known “Young Americans ,young Americans,she wants a young American”,Bowie now sings “Cana­diens”,thus making quite a special version of the song.
The weekend prior to the concert Bowie has spent rehearsing with the band and at some places he has made some alterations: e.g the instrumentation of Stay underwent some changes,an im­ provement. Throughout the rest of the tour Bowie played this version of the song.
This was the first concert of the American tour and was an undiluted success. The audience were absolutely hysterical and enjoyed every minute of the show they had already heard so much of.

Gap @ 0:19 in Golden Years – fade-ou/in, around a second lost
Fade towards end of Red Sails is on source tape.
Tape flip just before end of China Girl. Fade-out/in.
Statis interference on White Light/White Heat @ 1:29-1:31 is on source tape.