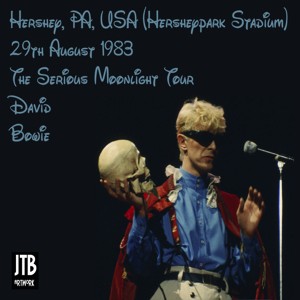 There was some rain during the concert,so that the band were forced to hide under huge beach parasols to protect them from the damp. “Thank you” Bowie says during the band intro,“we can’t keep on meeting like this. Good evening, … all you oil millionaires”,the latter escapes me.the audience don’t respond. “Let’s all go swimming,shall we’? Your place. Anybody got a plectrum? OK,this is a song from an album we did in 1975”. “1975” he says.
That Star is played as an extra means that Look Back in Anger was the ope­ning number. China Girl was sung beautifully,but at times the sound fades for a short while.
There is only a massive sound from the audience when Bowie lets them sing “Break down and cry” and when in the end of Fame he incites them to call “Fame fame aah aah stick it, stick it!”.