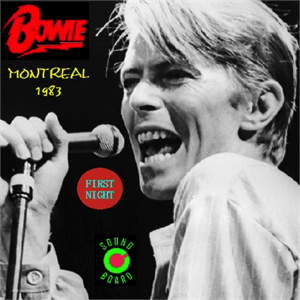 We have a very special guest for you this evening … it’s, your royal highness Prince Charles of England” Bowie jests,“No he’s not” he then says,and the audience are rather confused. “Here he is,no he’s there. May I know your names? Your names,what’s your name? Joey Salabo, this is for Joey Salabo,it’s called Young Americans“.

Notes for set 1
This set is taken from the two-night stand David Bowie gave at the Montreal Forum in 1983. Each show during this Serious Moonlight tour had two sets with a 20-minute intermission, resulting in over 90 two hour-plus concerts in 15 countries in 1983.
After a period of releasing dark, more experimental albums such as Low, The Lodger and Scary Monsters in collaboration with Brian Eno while living as a single man in Berlin, Germany, a string of only semi-successful commercial hits and battling a well-publicized cocaine addiction, David Bowie overcame his demons and teamed up with Chic member and producer, Nile Rodgers. The result was 1983’s Let’s Dance, a commercial record that most critics continue to regard as one of his best.
Smiling and obviously happy with his newfound artistic muse, David Bowie greeted a sold out Montreal forum on this night, and launched into a brilliant show full of both hits from Let’s Dance and some of the more radio-friendly tracks he had done during his Berlin sojourn. Fronting a killer band, Bowie began the evening with three lesser known hits – “Look Back In Anger,” “Breaking Glass” and “Scary Monsters (And Super Creeps)” – before launching into “Rebel, Rebel,” his 1974 hit single from the Diamond Dogs LP. This tour reunited Bowie with guitarist Earl Slick, who had replaced Mick Ronson for the Diamond Dogs recording sessions. Slick delivers the rock edge that had been missing from his music made during the Berlin years. The band is propelled by former Chic/Power Station drummer Tony Thompson, who, along with members of the Tower of Power horn section, helps make this one of the best backing bands in his long musical career.
The majority of the set is essentially a collection of Bowie hits that includes “Heroes,” “Life on Mars?,” “Fashion” and his two big radio hits from Let’s Dance: the title track and the ever infectious “China Girl.” Other highlights include Bowie’s version of the classic 1967 Pretty Things hit, “Sorrow,” (which he originally recorded for 1973’s Pin Ups record) and his modern re-make of The Velvet Underground classic “White Light, White Heat.”

Notes on set II
Actually the second half of a single show, this recording begins with Bowie offering a compelling version of “Station To Station,” the title track from the 1976 album of the same name, to open the second set. From the moment he sings the initial line: “…the return of the thin white duke…” the crowd is all his – on their feet, and reveling in the homecoming. From there, things only escalate. He then launches into a powerful version of “Cracked Actor,” a tune from 1973’s Aladdin Sane, drawing a special roar from the audience when he delivers the controversial line “…suck baby suck, give me your head…” Leading a monumental, 10-piece band, he grooves through a collection of mostly hit songs that includes “Space Oddity” (his first hit single), “Young Americans” (his first dance hit), “Fame” (which he co-wrote with John Lennon) and a trio of all-out rockers: “Cat People,” “Putting Out Fire” and “Jean Genie.” This tour only featured one song from his legendary Ziggy Stardust LP, “Star” – but it’s a memorable one, nonetheless. Noticeably absent from the show was the usual Bowie show-stopper “Suffragette City,” but he more than makes up for it with what would have been, back then, a mix of classic and modern Bowie. Among the other highlights are a version of “Modern Love,” which kicks like a mule, and a spunky version of The Who classic “I Can’t Explain.” A must for all Bowie fans; proof that, no matter what the persona, the man could rock out with the best of them.