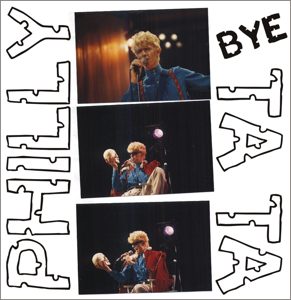 After the deatenlng applause following Space Oddity Bowie imitates the audience for a while,screaming just as hysterically! Quite funny; the audience laugh and their cheers become even louder. “Thank you very much indeed, Thank you very much” Bowie thanks them, This is the last of four con­secutive concerts in Philadelphia,where he has played no less than 26 times in the period of 1972-1983! Philadelphia is among Bowie’s favourite cities; he has always felt close to it and it has one of the highest numbers of Bowie-fans. He had been looking forward to those concecerts in the Spectrum . For a short
while Bowie gets quite emotional,saying in a tiny voice: “Okay Philly…..I knew I’d come back here & play”. When introducing the band he commits an error: “On synthesizers and guitar hahaha,guitar! – keyboards David Lebolt”! After the band intro Bowie tells the audience of his time in Philadelphia ,when he was recording Young Americans ,which had bad been among the best periods of his life,but since Bowie speaks in a very low voice and the audience is screaming so much , one cannot hear too well.
an excellent tape. 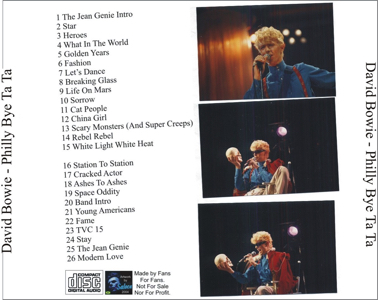