lovely tits:
“Firstly I’d like to thank the Tubes for their excellent support over the last few days” Bowie says,and then an awkward moment,when he says “They have lovely tits. I’d like to intro­duce my band to you,who have no tits but big talents”. Bowie calls Young Americans “a folk song from the mid-Seventies” and the audience’s response to recognising the first notes is very positive. TVC15 ends with Bowie and the band producing a much­ prolonged drawing-out; must be quite exhausting!

Notes:
David’s stop for the Seattle area in the newly opened Tacoma Dome for the Serious Moonlight tour. This show was the very first show to be booked at the Tacoma Dome when it first opened. The first artist to perform here though goes to The Tubes who opened for Bowie this night.
The recording sounds good but the microphones starts to have issues from Fame until the end of the show so the sound quality drops and fluctuates from that point on. 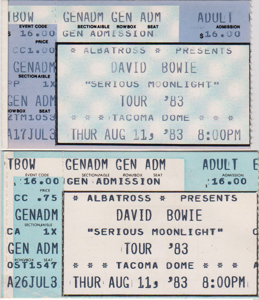 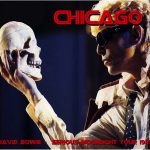