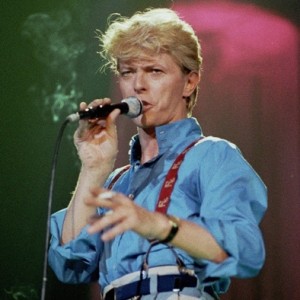 The Vets Coliseum gig in 1983 was seen as a quick stop over from LA to the Dallas gig of the 19th, and it is a great show.
The Audience were quite hysterical ,and since there were no seats right in front of the stage ,people were squeezed together there ,which – initially – led to some fights , but once the concert got wet underway there was nothing but light-hearted dancing everywhere in this basketball hall .
Bowie Introduced himself as Stevie Wonder (see video)
This version is complete, there are other versions that circulate but most of those are not the complete show. There are lots of cuts in between songs but it doesn’t materially affect the listening. Scary Monsters and Rebel Rebel are recorded a little ‘hot.’