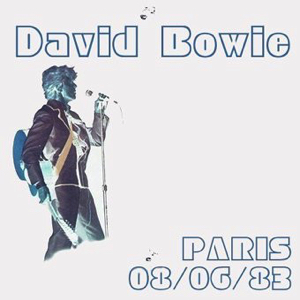 This concert was a great succes
For the first time in this tour a screen was hung over the stage – as was sometimes done in ’74 – for simultaneous pro­jection of the concert. A perfect solution: now people did not have to depend so much on their binoculars.
At 6pm there was first some French band which was not much of a hit,and was soon whistled down. At 7pm Dexys Midnight Runners who did have some succes with the audience up to the moment when singer Kevin Rowland said : “David Bowie is full of shit!”. What a nerve to say such a thing before 60,000 fans of the idol! He called Bowie a bad copy of Bryan Ferry (!) and later he told the British press: “We only agreed to the show because France is an important market for us – not because I have any respect for Bowie”. Instantaneously the group were drowned in whistling and showe red with tins and other missiles and they left the stage.
At 9. 15pm at last the concert started; the three carneramen were doing a good job,but it was another thirty minutes before the daylight had gone and the projections on the screen became quite visible.
This concert was a great succes; like the shows in Lyon and Frejus it was much praised in the press. After the concert there was a party to celaebrate the succes. Bowie was seen with Grace Jones and many papers showed pictures of the pair.
In one week’s time 60,000 tickets were sold,according to promotor Albert Koski. Not really exceptional in comparison with other countries,but for France this was a record!

Of this concert Bowie must have been quite nervous ,for this was his first time to perform for such an immense crowd (apart from the US Festi­val).