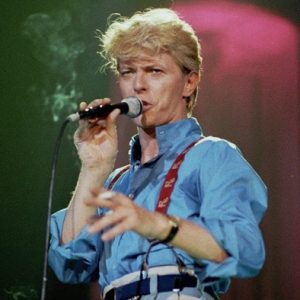 The audience are highly enthusiastic and Bowie sounds cheerful so it is a good concert.
Bowie sings through his nose or at least has a gigantic cold ,and the audience sound like a troop of whining biddies!
It often happens that a tape has the wrong speed owing to the use of inferior apparatus during re-taping.

Info :
I bought these tapes around 1985 : at this time the guy had two versions of this show, a very low gen one and the one who came from the bootleg version which was called “Serious Moonlight 83”. I asked him the best version of the two, the low gen one but now, listening to it carefully after all these years I have doubts whether this is really the one I asked for, or if these tapes were used to make the LP…

Anyway, as I was listening to it maybe two years later, I accidentaly erased the introduction to it. Fortunately, I myself had the opportunity later to buy a version of that famous bootleg LP, “Serious Moonlight 83” from a guy that sold his bottleg collection. I grabbed the intro from it and edited my old tape, filling the blank in a very artisanal way counting the seconds not to erase more from it !

As you can imagine, the job was far from perfect : first the recording from the LP wasn’t running at the same speed, then the sound wasn’t as loud as on the tape. Finally there was a big noise which figured the transition between the two.

Thirty years later, here comes my job with Audacity : finally editing the band intro coming from my bootleg LP and joining it the best I could with my old tapes.
The resulting you have it now.