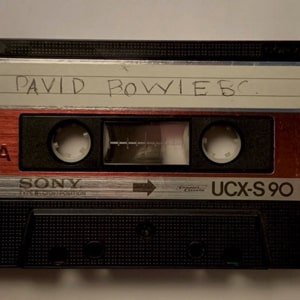 For after “Heroes” Bowie says: “We don’t want anybody hurt,don’t push too much down there”.
After Space Oddity Bowie says in a very low voice “Thank you” ,it sounds as though he is not entirely at easy,playing in this large stadium. “It’s very big you know,this one” he says. “This is a very old song” Bowie says to the 53,687 headed crowd.

This was a very important show for me and my friends. David Bowie had not toured since 1978, it seemed like an eternity at the time. Finally, he was coming to Vancouver and he was the first big name at the new Stadium.
We spent the whole day waiting and meeting girls in the line, got lots of phone numbers, had a 2-4 of EOS beer delivered by some friends and finally after a long wait we were let in for the show. The show got started with The Tubes up first followed by Peter Gabriel. One of our friends had scored free tickets to the show from Peter Gabriel. Our friend was a lifeguard and had actually helped rescue Peter Gabriel after he had drifted out in the bay on a windsurfer and could not get back to shore. Gabriel was super grateful and got tickets as a thank you for our friend. After this brush with fame we were pretty excited about Peter Gabriel as well.
We only had enough tape for Bowie though and that’s what we recorded. The crowd on the floor was pretty sparse at the beginning of Bowie. We scouted out a good position and got ready. When Bowie came on the crowd surged forward and we were swept up in this swirl of people. The recorder got jostled and the first two tracks were lost – The Jean Genie intro and Star – we repositioned in time for Heroes and got things going again. You can hear Bowie say to not push too hard in the front we don’t want anyone hurt.
We thought that was very cool of him to see what was happening on the floor. There were tape flips just after Cat People and Space Oddity. At the end of the show during Modern Love moon shaped silver balloons dropped from the sky and the show was over too fast. Bowie returned in September to record his Serious Moonlight concert video at the Pacific Coliseum.
We went to both of those shows as well, but the BC Place show seemed to have more electricity about it – listening to this you can hear the small differences in vocals that Bowie does compared to the September shows. David Bowie would have been 74 today if he was still with us and it will be 5 years since he passed on Sunday. 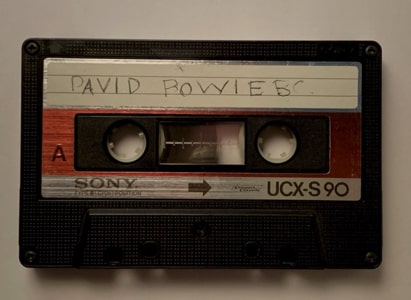