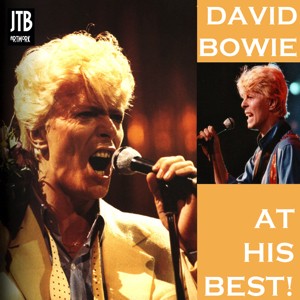 Label : No label
Audio Source : audience
Lineage :
Total running time : 1:51:s0
Sound Quality : Not good ,much Noise ,very dull
Attendance : 18.100
Artwork : by JTB Artwork
Note : This is a real version of this show (there are many fakes out in circulation) ,it’s NOT the best sound quality, but i think its a pretty rare one.
Tracksplit : No

When the band starts playing Look Back in Anger it sounds rather odd,because Tony Thompson doesn’t join in with his Drums; this leads to an incomplete sound,but after a couple of seconds he too joins in. There is a rare incident during this conccrL: Bowie coms on,starts singing,but his microphone is out of order! He turns around , flings the micro down and leaves. The band stops playing Bowie gets another micro. “Good evening” he says when he is back, “now we’re gonna try the same song,with a microphone.”. They try again,now everything is in perfect order,much to the screaming joy of the audience.
Bowie announces What in the World by saying “You’re jus t a little girl with grey eyes”. For some reason he misses the first line in Cracked Actor,and starts at “the best of the last …”.
during the band intro bowie talks a lot but not much of it clear to understand; I am rendering the words that can be heard: “Thank you. Thank you very much indeed,good evening. Ha ha … thank you very much. I’d like to say that this only is tonight,probably the most. ‘.’ .THANK YOU! I’d like to introduce my Band.” …drums – he was telling me the joke the other day about …. We’re having a very amusing show tonight. You’re a wonderful audience”.
In Young Americans Bowie refers to Reagan; whereas in Europe he did this ill almust every concert,in America he hardly ever mentioned Reagan; this was one of the very few exceptions. At the end of the number Bowie wants the audience to finish “Break down and cry”,holding the microphone in their direction but all that comes is some screaming!