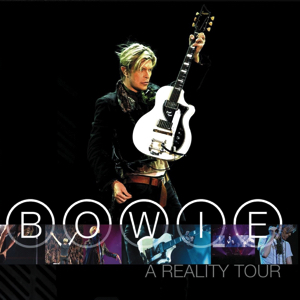 was a worldwide concert tour by David Bowie in support of the Reality album. The tour commenced on 7 October 2003 at the Forum Copenhagen, Denmark, continuing through Europe, North America, Asia, including a return to New Zealand and Australia for the first time since the 1987 Glass Spider Tour. Bowie retired from performing live in 2006, making this tour his last. The tour grossed US$46 million, making it the ninth-highest-grossing tour of 2004.

A Reality Tour was a worldwide concert tour by David Bowie in support of the Reality album.The tour commenced on 7 October 2003 at the Forum, Copenhagen, Denmark continuing through Europe, North America, Asia, including a return to New Zealand and Australia for the first time since the 1987 Glass Spider Tour.
The tour grossed US$46m, making it the ninth-highest grossing tour of 2004.

History
Bowie announced the tour in June 2003, intending to play to over a million people across 17 countries, and was billed as his first major tour since the Outside Tour of 1995. Bowie promoted this tour with appearances on primetime television shows such as The Tonight Show and on AOL Sessions. At over 110 shows, the tour was the longest tour of Bowie’s career.
Performance
Bowie sought to perform in the format of a stadium concert with less focus on elaborate staging and more focus on the musicians in his band. The stage featured a number of platforms, some extending into the audience, as well as multiple video-screens projecting artistic images and live footage of the concert along with many colored lights for effects. The stage was typically placed at one end of the stadium or arena with seating in the stands or on the field itself with a back-stage area on the far side of the stage.
The musicians were dressed in casual but colorful outfits; nearly each musician had a set of outfits in different colors, such as Bowie’s cut-off shirt and neckerchief or Gail Ann Dorsey’s dress. Musicians were free to move about the stage as their instruments permitted with wireless amplification, though Bowie and Dorsey interacted most often as part of the acts.
Each concert began with an introduction on the main video-screen, during which the band would enter the stage and prepare the opening number. After the opener, Bowie would greet the audience with the flexible line, “Hello, [city name], you crazy bunch of motherfuckers” as a sign of welcoming. The performances, between the somewhat staged pieces, were informal often with a dialog between Bowie and his audience, jokes, band introductions, and the occasional “Happy Birthday To You”.
Repertoire
The set list included tracks spanning Bowie’s 30 plus years in the music business, from The Man Who Sold the World (1970) all the way to Reality (2003), along with collaborations such as Sister Midnight (with Iggy Pop) and “Under Pressure” (with Queen), and snippets and teasers of Bowie classics such as “Space Oddity” and “Golden Years”. There is a bit more focus, however, on tracks from the albums released since the Earthling World Tour in 1997, Heathen (2002), and Reality. The only exception from his latest albums is ‘hours…’ (1999); no tracks from this album were included, possibly due to poor reception of the album. Other albums with no appearance included Space Oddity (1969), the cover album Pin Ups (1973), the ill-received Never Let Me Down (1987), the albums produced with the band Tin Machine, and Black Tie White Noise (1993).
A notable inclusion into the tour were the tracks from The Rise and Fall of Ziggy Stardust and the Spiders from Mars, usually performed as the final encores. “Ziggy Stardust” was nearly always the finale of each concert.
The inclusion of tracks from Let’s Dance and Tonight was also notable, considering a fan tendency to reject the albums as “too commercial”, seeing the return of the singles “Modern Love”, “Blue Jean”, “Lets Dance,” “China Girl”, and a semi-acoustic version of “Loving the Alien”.
Overall, the band had rehearsed around 60 songs for the tour.
Tour inciden
Originally scheduled to play in 24 countries over a ten-month period, the tour was curtailed after the Hurricane Festival performance in Scheeßel, Germany on 25 June 2004, as a result of Bowie being diagnosed with an acutely blocked artery that required an angioplasty procedure.The previous performance at the T-Mobile Arena, Prague, Czech Republic on 23 June 2004 had been interrupted as Bowie was forced to leave the stage believing he was suffering from a trapped nerve in his left shoulder. A previous incident in Oslo on 18 June 2004 saw Bowie being struck in the left eye with a lollipop thrown by a member of the audience. On 6 May 2004, a performance at the James L. Knight Center, Miami, FL was cancelled after a lighting technician fell to his death prior to Bowie going onstage.
Live recordings
Main article: A Reality Tour (film)
A DVD video of the Point Theatre, Dublin performances of 2003 was released as A Reality Tour in 2004. A CD of the same performances was released as A Reality Tour in 2010.

On 19 August 2003 Bowie performed a one off show in Poughkeepsie, New York at The Chance, as a warm up show.
On 8 September 2003 Bowie performed a show at the Riverside Studios in London which was a ‘satellite show’. This was a live performance beamed via satellite to cinemas and theatres across Europe and due to time delay the following day across Asia, Australia,

Other songs:
“A Hard Day’s Night” (from A Hard Day’s Night by The Beatles, written by Lennon and McCartney)
“All the Young Dudes” DVD/CD (from All the Young Dudes by Mott the Hoople, written by Bowie)
“Bang a Gong (Get It On)” (from Electric Warrior by T.Rex, written by Marc Bolan)
“Do You Know the Way to San José” (from Dionne Warwick in Valley of the Dolls by Dionne Warwick, written by Burt Bacharach and Hal David)
“Here Comes the Sun” (from Abbey Road by The Beatles, written by George Harrison)
“It Can’t Happen Here” (from Freak Out! by The Mothers of Invention, written by Frank Zappa)
“Liza Jane” (the first ever Bowie’s single, released under the name Davie Jones and the King Bees, written by Leslie Conn)
“Puppet on a String” (a single by Sandie Shaw, written by Bill Martin and Phil Coulter)
“Rumble” (a single by Link Wray & His Ray Men, written by Milt Grant and Link Wray)
“Sister Midnight” DVD/CD (from The Idiot by Iggy Pop, written by Pop, Bowie and Alomar)
“Song 2” (from Blur by Blur, written by Damon Albarn, Graham Coxon, Alex James and Dave Rowntree)
“Summertime” (from the opera Porgy and Bess, written by George Gershwin, DuBose Heyward, Dorothy Heyward and Ira Gershwin)
“Under Pressure” DVD/CD (a single by Bowie and Queen from the Queen’s Hot Space, written by Bowie, John Deacon, Brian May, Freddie Mercury, Roger Taylor)
“White Light/White Heat” (from White Light/White Heat by The Velvet Underground, written by Lou Reed)
“Y.M.C.A.” (from Cruisin’ by Village People, written by Henri Belolo, Jacques Morali and Victor Willis)