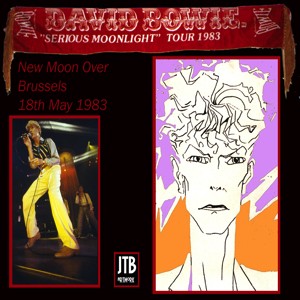 In 1983 Bowie returned to the stage after an almost 5 years break, this time not as a cult artist,but as a mainstream artist. Having just released the million-seller “Let’s Dance” combined with the fact that Bowie had not toured for so long guaranteed sell-out concerts almost everywhere around the globe.

Before the start of the Serious Moonlight Tour, Bowie and his band decided to do 2 try-out concerts,this is the first one. Basically, these try-outs were longer than the normal tour concerts. This concert includes some rare performances of songs like “Wild is the Wind”, “Joe the Lion” and “I Can’tExplain”.

This recording is sourced from master cassettes and was carefully re-mastered and edited in order to get the best sound. The original recording suffered from microphone problems, but you’ll be suprised by the good sound quality of this re-master.

News papers:
Three Dutch papers wrote about this concert,giving him much praise.

Three Belgian papers also glorified the concert,one calling it ‘one interminable orgasm’ (!), and: “This was unearthly. Bowie is god,in the unreligious sense of the word”.

A Swedish paper wrote “Bowie in tears after debut”,and,oddlly enough,there was one not-so-positive review.

A Belgian wrote: “Now everyone wants to hear from those present what it was like,well,good,excellent,amazing,but … no real exuberance,not the real joy of rock & roll really”. I will not commenton this! !

Expectations of this concert ,the first after 4,5 years time, were sky high. Besides hundreds of – Belgian and foreign – journalists who had come to Vorst there were Bowie freaks from allover the world.