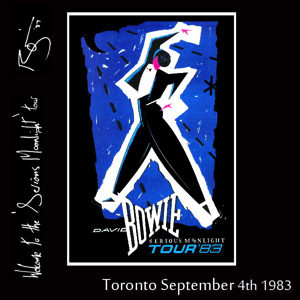 A sensational announcement
,true,but a little odd all the same,for there were no more than two con­certs in Toronto,whereas the announcement made it sound as though Bowie had been there for a whole week or so.
Bowie ends Breaking Glass by calling “Oh no,no!” to the rhythm of the song over and over again,ending in prolonged “Nuoooooo!”.
After Space Oddity Bowie hints that this is going to be a very special concert: “Thank you very much. Good evening! We have got a very exceptional surprise for you at the end of this evening,and I’m not going to tell anything about it”,and in a child’s voice “Don’t have to,if I don’t want to”. “Steve Elson,who’s not really a Russian” he says when introducing the band. “This is a song from the Young Americans album. We’re having a very good time tonight by the way,we’re enjoying our­ selves a lot”. Indeed he sounds quite cheerful,and he laughs orten while singing.
Then During Jean Genie ,it coms,when at the beginning of the song Bowie says: “I was walking through a corridor in Toronto last night,and I ran into somebody I haven’t met for eight years,and I said ‘What are you doing tonight?’ ,and he said ‘Not much’. So I said ‘Do you wanna come in play with us’. He hasn’t worked with me for ten years,I’d like to introduce one of the original Spiders from Mars – MICK RONSON!”. 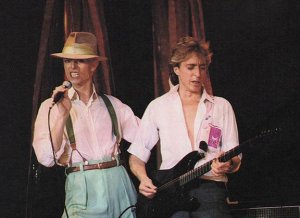 The audience are amased and give a loud cry. Ronson,Bowie’s trusty guitarist in the Ziggy days.appears and plays along with Jean Genie,the song Bowie and Ronson had played together for the first time during the US Tour,October 1972,and which they had continued to bring at each concert throughout the Ziggy period. Down on his knees.overcome with emotion,Ronson plays a long solo and the audience are absolutely frantic. It is only a short visit, and without having said a single word Ronson dis­ appears from the stage. At the beginning of Modern Love Bowie says “I’d like to thank Mick Ronson for coming and joining us tonight. I’d like to thank you particularly for being here, it’s been a pleasure!” 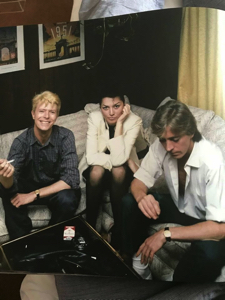