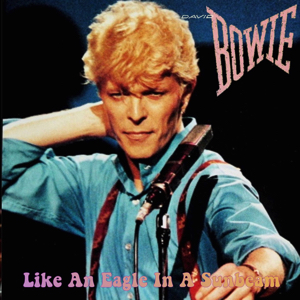 Bowie was quite relaxed
Not of high quality,but the second half gets better. This was a very good concert; Bowie was quite relaxed and cracked a joke now and then. The audience often laugh at moments .
“Thats the worst world I ever saw” Bowie says just before the band intro, and I have a sort of idea that the balloon burst or something. “Thank you very much. OK,which was the real one. I’d like to introduce you to my band”. After introducing the Borneo Horns Bowie makes game of the audience: “On trombone Gregory Arbellovicc” he says and they just applaude,but then immediately after that Bowie says,sounding a little surprised: “Aaaah ,we don’t have at rombone”. The audience had their laugh over it!
Now and then there are sur­face noises,and when the audience cry for an encore,there is a rumbling , drumming of all the stamping feet on the galleries. Modern Love is spoilt by Bowie singing the lyrics in the wrong order and somewhat out of tune,terrible.

Notes
Running a little fast – speed correction with a factor of 97%.
Clunky join in audience noise between Breaking Glass and Red Sails – faded to make it a little less obvious.
Gap in crowd noise between Cat People and China Girl – removed with minor fades.
Seems to be a kit problem, which means that from 0.7 seconds into China Girl and onwards, the tape speeds up again. Remainder of concert speed corrected again with a factor of 95%.
Tape flip between China Girl and Scary Monsters – clean join.
Messy bits in applause between Hang On To Yourself and Fame – simply removed.
Tape flip between Fame and Stay – joined with fades.
Encore break gap between The Jean Genie and Modern Love – removed with minor fades.
Sector Boundary Errors fixed with TLH.