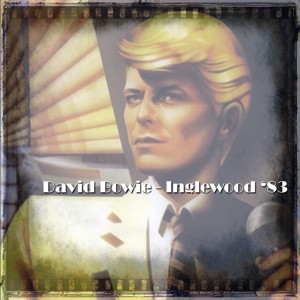 Crowds of film stars and other celebrities had come to the Forum to watch Bowie,and lots of them were also present at the part following the concert,to mention a few: Michael Jacksun, Sissy Spacek,lrene Cara,Henry Winkler,Tom Conti,Prince,Barbra Streisand,Donald Suntherland,Richard Perry,Bette Midler ,Kim Carnes,Mick Fleetwood,Toni Basil,Sally Struthers.
“This town makes me a bit nervous” Bowie said. “They all seem to want a bit of me”.
Living in LA for some 18 months has left him with little less than a trauma. He is still tremendously popular here: these two concerts in the Forum were sold out in a matter of 90 minutes. The Forum tried to persuade him into adding two more nights,but since the tour was more than fully booked this was
impossible.
A lot of audience can be heard on the tape – and a very enthusiastic audience they are. During the band intro Bowie says a few things: