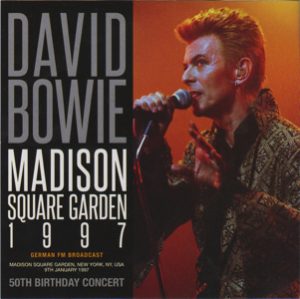 Superb Bowie Performance From The Earthling Tour. David Bowie’s 20th studio album was originally released in February 1997 on Arista Records. Earthling showcased an electronica-influenced sound partly inspired by the industrial and drum and bass culture of the 1990s. It was the first album Bowie self-produced since 1974’s Diamond Dogs.

The Earthling Tour started on 7 June 1997 at Flughafen Blankensee in Lübeck, Germany, continuing through Europe and North America before reaching a conclusion in Buenos Aires, Argentina on 7 November 1997. On August 14, ‘97, Bowie performed at Hungary’s Student Island Festival in Budapest, where he put on a quite extraordinary show, accompanied as he was by Reeves Gabrels on guitar, Gail Ann Dorsey on bass, Zack Alford on drums and Mike Garson on keyboards. Playing just a few tracks from the new record plus a fine selection of back catalogue gems, the entire show was broadcast, both across Eastern Europe and indeed in the US too on selected FM stations. Previously unreleased this remarkable gig is now available on this priceless CD for the first time.

Bowie and his band began rehearsing for the tour in April 1997, and expected the tour to last “from May through Christmas” (1997). Bowie expected it to be “really extensive, a long, long tour.

The original concept of the tour was to perform two separate set lists, one regular, and one dance-oriented set incorporating drum and bass. The two set-lists was abandoned, due to media critics and audience apathy, after the Muziekcentrum Vredenburg – Utrecht performance on 11 June 1997 with elements of each incorporated into the one set.

The 19 July 1997 Phoenix Festival performance, was billed as Tao Jones Index, in the BBC Radio 1 dance tent preceded the regular performance on the main stage the following day. The 14 October 1997 show at the Capitol Theatre – Port Chester, NY, broadcast on MTV’s Live from the 10 Spot, was added at short-notice due to cancellation by The Rolling Stones. The following show on 15 October 1997 at the Radio City Music Hall – New York City was as part of the GQ Awards. The set-list for the shows included a version of the Laurie Anderson work O Superman with lead vocals by Gail Ann Dorsey. Tour Publicist Tony Michaelides handled press, radio & television for Bowie.

13 July 1997 Frauenfeld,Switzerland,Out in the Green