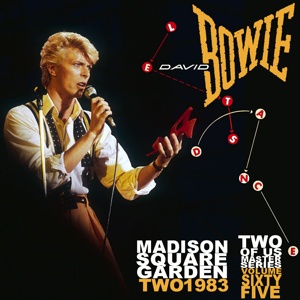 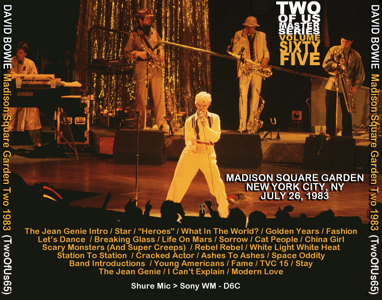 David Bowie was the artist that started it all for Two Of Us, a favorite artist, Bowie was taped on multiple occasions and are amongst the earliest shows recorded outside of a few shows recorded to likely prepare for the Bowie tour.

Once again, they acquire their usual excellent seats and the resulting capture is a big upgrade over the circulating version (at least to the version on youtube).

David and band are once again firing on all cylinders and clearly David is enjoying himself on this night. The first indication it’s going to be a great performance is David’s ad lib of “I know” over and over during the reprise section of “Heroes” and punctuating the end of the song with an energetic “damn it just for one day”. He also throws in some ad libs during “Modern Love” as well. See provided samples.

These Madison Square Garden shows are special, the opening night (Volume 63) we got a rare playing of “Red Sails”, though “Red Sails” is dropped on this night and we get the rare addition of “I Can’t Explain” in the encores.

These MSG shows also come with an extremely energetic noisy audience but iZotope works its magic and we have spent a lot of extra time on this one removing almost all external audience noise making this an excellent listen from start to finish.

Thanks to “Two Of Us” and their dedication to capturing all these great shows as well as trusting me to be the caretaker of their work. Also, a big thank you to my friend “fmcleanboots” for putting me in touch and laying the groundwork that has resulted in this release and finally to professor goody for always being “on call” to ensure we’re at the correct pitch…we’ve only just begun to scratch the surface.