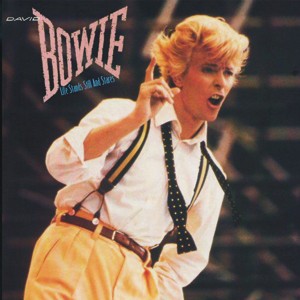 A couple of bars of the blues intro are also recorded on the tape and following these Tony Thompson can be heard trying out his drums. Much shouting of the local audience,but not an overall sound. “That was a song called Red Sails,from the Lod­ger album, this is one from the Low album,it’s called Breaking Glass”. Ont! can also hear people in the crowd taJking now and then,and during Ashes to AsheR someone says: “I’m filming,put me on your shoulders” and next “I got a good picture anyway”.
“I wrote this one in 1975,and it’s from an album called Young Americans. It’s called Young Americans” Bowie says ,and, like in Chicago,Bowie turns the end of Fame into some kind of singalong: “Fame,fame ,aah,aah! Dig it,dig it!”. Much echoeing and the crowds are singing along loudly.

As 60,000 fans roared their approval at this, the largest rock concert ever in Alberta, Bowie’s first song was a parody on the rock-star syndrome.

“I could play the part of a rock ‘n’ roll star,” he crooned.

Ziggy Stardust may have made a special guest appearance briefly during Sunday’s performance.

The Thin White Duke may have seemed still powerful during the song Station to Station.

And the plight of astronaut Major Tom may have drawn wild applause during Space Oddity and Ashes to Ashes.

But the night belonged to the new Bowie: The Superstar Showman.

This was obviously Bowie’s latest incarnation as he glided across the stage with Bing Crosby cool, did nifty little dance steps like a tanned Fred Astaire, and even used a beach-ball globe bouncing about as did Charlie Chaplin in The Great Dictator.

What the sellout crowd received was a two-hour medley of his hits and misses (now all respectable of course), dressed up in dance steps by his two male backup singers, plus a modest back-drop of two giant sheer cylinders.

There was no time for talk, for acknowledging the massive crowd which had endured 29 degree Celsius weather (though, it seemed much hotter). Bowie only introduced his band a couple of songs.

There was no need for more. Bowie is the Superstar Showman and all are to be honored simply to be in his presence.

Bowie’s set was excellent musically and smooth as the day was hot and long. Yet one thing was missing: Emotion. As brilliant as Bowie could be, he never once went over the edge into a sense of creative urgency.

Every song was executed with a crafty cleverness, but the depth and passion of his lyrics seemed ironically missing from his stage presence.

Few minded, however. To have seen Bowie was to have loved Bowie. Ziggy is dead and the Superstar Showman is King.

Gap of at least five seconds in the intro to Heroes. Removed (but leaves a jump)

During intro to Fashion, 20 second stretch (8-28′) where right channel is muffled and left suppressed.
Volume on left channel boosted, then copied to right channel to replace muffled sound.

Tape flip between Space Oddity and the band intros. Crowd noise only lost.

Modern Love is missing (but was played)