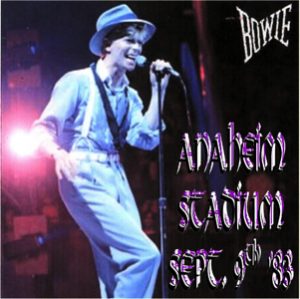 The tour would eventually wind it’s way to southern California, and while the California Angels were losing a road game to the White Sox(0-11, to be exact), David Bowie was using their home, Anaheim Stadium, to grace Orange County Bowie fans with what was probably the greatest show they’ve ever seen. Why wasn’t I around to be there? Life is completely, totally unfair.

It was a great time be be alive, and to be a David Bowie fan. You were experiencing a resurgence of an artistic talent the likes of which this world, in my opinion, has never seen again. On top of that, you had youthful, exuberant openers Madness and The Go-Gos(on their Serious Bar-B-Que tour…here’s a live rendition of “we got the beat” taken from that very concert) doing their best to get the crowd warmed up for the set of a lifetime from Mr. Space Oddity himself. I mean, look at this set list. I feel so helpless…there’s nothing I can do but drool and be sad that I was only two years old at the time and therefore too young to have experienced this awesomeness.