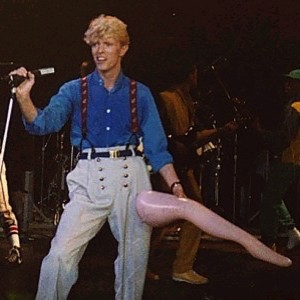 Swinging ,Jigging ,and Singing:
Ladies and gentlemen ,on stage for the absolutely ,positively FiNAL performance of the 1983 Serious Moonlight Tour – David Bowie and his band !” the announcer cries,and the band burst into … Scary Monsters??! A strange,but interesting order for this second concert in Hong Kong. “Ah,thank you George” Bowie says before Heroes,probably getting A towel or something. “This next song comes from an album called Low,and it’s called What in the world“ Bowie tells the enthusiastic audience who recognise each song. “Thank you so very much, thank you” Bowie says when he is given a deafening applause after Space Odity,and in a low and very sad voice: “Well ,well ,well … this is … this is handker­chief time for all of us. It’s been eight months on the road now,we started in March this year,and I think we’ve done just about every country in the world,and it’s lovely to be here”. The crowd cheer his words and are very pleased with the swing­ing version of Young Americans. The audience applaude and sing along with the last lyrics of Fame and then Bowie says in a somewhat raucous voice: “I co-wrote that song with John Len­non. And I asked him one day ‘How do you write your songs’ ,and he said ‘lt’s easy,you just say what you mean,and you put a back-beat to it’. I said ‘What do you Think of my kind of rock & roll’. He said ‘It’s great,but it’s just rock & roll with lipstick on'”.
He pauses for a while and the audience cry out frantically. Bowie continues his touching story: “Last time I saw John Lennon was in Hong Kong,we went to a Hong Kong market and there was a stall that sold old clothes,and there was a Beatles jacket on the stall,and I did something that is not usually in my character – I asked him to put it on so that I could take a photograph,I took a photograph,and I still got the photograph. The jacket doesn’t fit properly,it looks like John has outgrown it”.
The beautiful song Imagine is played in honour of John Lennon ,
“Thank you,goodnight” Bowie says when the number is over and a couple of minutes later he returns for the first encore,Look Back in Anger‘,Stay and Jean Genie. Then he returned for Star and while he was doing Modern Love the stage turned into a bedlam: the Simms brothers started hurling things to the audience ,the entire road crew came running in the ,dancing and sending all sorts of things flying into the hall .towels ,hats and what not! then some 50 or so people came galloping up the stage ,and soon the whole place was swinging , jigging ,and singing.

David Bowie’s version of John Lennon’s Imagine now has video footage: Previously available on audio only, a video has appeared of the one and only performance of Imagine, which was performed on the Serious Moonlight tour in 1983.

Probobly the best available until the soundboard is released.Space Oddity is cut at beginning due to tape flip, and a very different set list to the normal moonlight shows.

Linage
I dont know who recorded this concert but received in a trade many moons ago [1983]. Unknown Generation but expected to be low