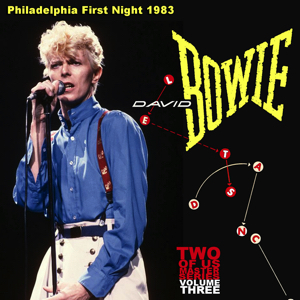 The Audience is hysterical and it can be heard loud and massive,and Bowie sounds as if he is really in the right mood. Before “Heroes” he
shouts: “You, beat off! “ – was someone from the audience getting onto the stage ? After Space Oddity Bowie laughs: “Thank you, good evening” and only moments thereafter a girl driven by hysteria manages to climb the stage and to grab hold of Bowie. Tony Mascia darts forward to drag her away ,but only after she has smashed her first right trough Bowie’s acoustic guitar! Bowie yells some,then says: “I’ve learned that from my mother ,she’s always crying that”.
Meanwhile the girl has disappeared; Bowie looks at his brand-new now smashed Ovation guitar,saying “Oh my god man!”. Then he says “I don’t care”: ofcourse he does,but he wants to keep up the happy atmosphere. “I’d like to introduce you to my band anyway” he says, and during the introductions he calls each member of the band by a nicknume. “OK,now you – what’s your name?” he asks, and as good as everyone in the audience replies.
The Film Modern Love was This Night Filmed 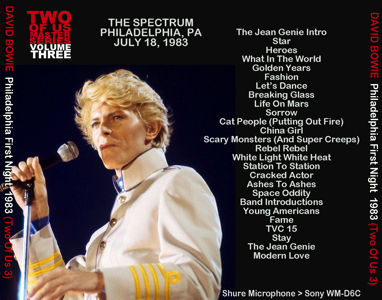