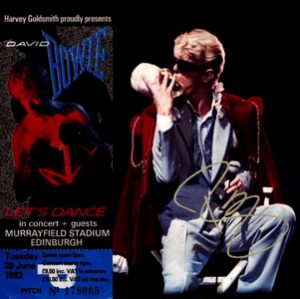 A very good atmosphere:
Oddly enough one can hear by the sound of the audience that this tape is Scottish – like the Glasgow ’73 tapes it contains a special kind of hysteria, typical of Scotland,which is heard nowhere else. A very good atmosphere,the audience applaude and sing along with many a song,for instance Life on Mars.
After Breaking Glass Bowie saw that in the front people were getting squashed: “Don’t push too much down there, ’cause sumebody will get hurt,and I don’t want anybody to get hurt,OK”.
During Ashes to Ashes the globe balloon burts which is accompanied by enormous cheering. A new balloon was brought in,so there were two now,one good one burst.
After the introduction of the band Bowie says: “I’ve got two worlds here. This one (the burst one) – I think we’ll send this one to President Reagan … and we’ll keep the good one for us. This is a song about the nicer Americans in life”.
A rare moment after Modern Love: gratefull and full of enthusiasm Bowie cries “Thank you for coming! Bye bye”. In none of the concerts did Bowie say goodbye to the audience.