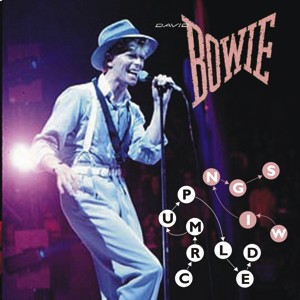 What atmosphere:
“I’d like to say that this is the single biggest crowd ever in the history of Australasian concerts” Bowie says after “Heroes”.
On the day of this concert the New Zealand Herald wrote: “British rock singer David Bowie arrived in Auckland last night and delivered a mas s ag e La the thousands of fans who will hear his concert tonight – enjoy it but behave yourselves. “We. are going to have a good time,just as long as people don’t throw bottles and act like hooligans”.”
They didn’t. The audience were thrilled,but calm. This immense stadium was used in an unusual way. The stage was not built in one of the far ends – the crescent parts – of the pit,as usual,but at one of the sides. The stadium lies at the foot of a hill,and there too,amid the trees ,seats had been placed. When darkness fell,the place was dotted with campfires. A large area around the stadium was encircleu by gates, and this whole area was full of people. It was the largest number of spectators (t.he US Festival not included) of the tour,and this was officially the last concert .What atmosphere…. .
During the band intro Bowie says: “Thank you,good evening.This is the last night at our tour as you know. And this is really very,very ……… for us,it’s marvellous to have ssuch a very beautiful audience,thank you very much. You’re beatiful”. From the moment of his arrival in Australia Bowie had been deluged with interviews in which he was asked to give his opinion on the nuclear arms problem. This is obviously still on his mind,for when he returns for Modern Love holding two white doves in his hand,he says: “Thank you. I’d like to say what a great tour this has been, I’d like to thank all my crew, everybody who’s worked with us,and … and these days it’s very hard to express my feelings about anything without feeling vulnerable,but I’d like to say that this little dove here. Charlie dove,I’d like him to be recognised as far as I’m con­cerned that is,I wish our world leaders would stop their insane inability to recognise (rising applause) that we wish to live peaceful!!”. The audience produce an immense roaring. “God bless you” Bowie concludes and releases the doves.

Two gaps @ 2:51 in Ashes To Ashes. First no impact, second clips a fraction of a second.

It’s not from the same source as the rest of the concert, so the join after Fame is audible.