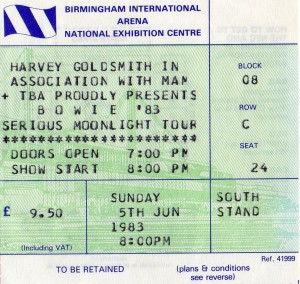 Bowie was quite relaxed
Not of high quality,but the second half gets better. This was a very good concert; Bowie was quite relaxed and cracked a joke now and then. The audience often laugh at moments .
“Thats the worst world I ever saw” Bowie says just before the band intro, and I have a sort of idea that the balloon burst or something. “Thank you very much. OK,which was the real one. I’d like to introduce you to my band”. After introducing the Borneo Horns Bowie makes game of the audience: “On trombone Gregory Arbellovicc” he says and they just applaude,but then immediately after that Bowie says,sounding a little surprised: “Aaaah ,we don’t have at rombone”. The audience had their laugh over it!
Now and then there are sur­face noises,and when the audience cry for an encore,there is a rumbling , drumming of all the stamping feet on the galleries. Modern Love is spoilt by Bowie singing the lyrics in the wrong order and somewhat out of tune,terrible.
This tape has a lot of Atmosphere .