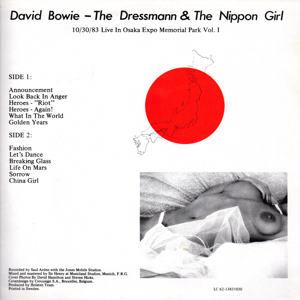 Actually the front of the cover is the main photograph and the title is on the back. Nice shiny cover with a rather interesting black and white photo of a man or a woman…can’t make it out.
The sound quality is reasonable with a nice Japanese intro followed by the usual explosive DAVID BOWIIIEEE and his band!!! Even the band commence with ichi nii, ichi nii san shi (1,2 – 1,2,3,4).
At the beginning of “Heroes” Bowie stops the concert because fanatical Japanese are moving dangerously close to the stage. “Ho: Ho! Please! Back, back!” he calls out and says a few words in Japanese. “Heroes” starts anew and Then Bowie speaks to the audience again. On this tape the audience can only be heard as a vague murmur in the background, though one can hear the continual chatter of a girl. “My little Mekong girl” Bowie sings in China Girl. During the band intro Bowie speaks Japanese again; I don’t understand regrettably,but he makes the audience laugh. At the end of this excellent concert Bovie calls out “Sayanora!”. 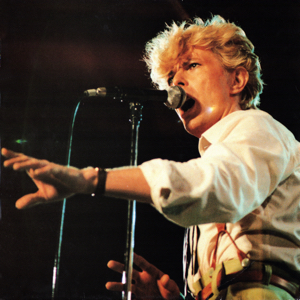 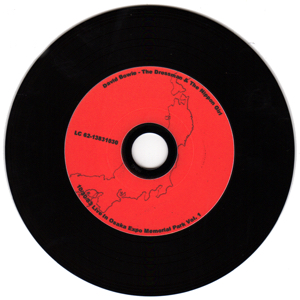