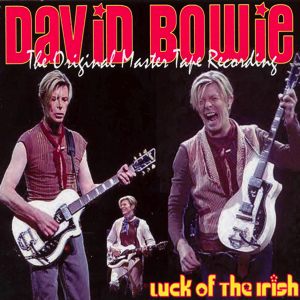 The second of two nights at the venue. 36 songs and just under three hours – that’s why the Irish were lucky.

Oh no…. no no no… Bowie! What!!! such a loss… Ziggy Stardust… Major Tom… I have tears flowing tonight… and I don’t cry easily, and not for celebrities. But this… this is my youth! Always an inspiration! The Man Who Fell To Earth! Labyrinth…. I am sooo glad that I saw him in concert, the China Girl tour… it was fantastic! Rough Trade opened… Good Bye David Bowie, thank you for the hours and hours and hours of dancing frenzy… so much fun… Let’s Dance… China Girl… all of them… Thank you, may you rest peacefully in an ocean of love. Good night.﻿

Bowie’s on sale again and, for two nights in a row, the fans are buying. The Point is stuffed on Saturday night for Bowie’s Reality tour, but are we just living out a rock ‘n’ roll fantasy, or does the Thin White Duke still rule?

Happily, Bowie performed plenty of his classic songs from the 1970s, and some of his better hits from the 1980s, but the reality is that he also played a lot of material from latter-day albums such as Earthling, Hours…, Heathen and his most recent platter Reality.

If, however, you went to the bar or the bathroom during these songs, then you missed a whole dimension of Dave, not to mention half the gig.

At 56, Bowie is looking lean, trim but still superbly iconic; his skeletal grin beaming down on the Dublin audience as he attempts to greet us as Gaeilge.”Conas ataw shin?” he asks, very nearly getting it right. “Gurramahagive!” he cries, hitting the mark this time.

Fame gives us a taster of classics to come, but a cover of The Pixies’ Cactus packs more of a sting. China Girl gives guitarists Earl Slick and Gerry Leonard a chance to spar, while The Loneliest Guy lets pianist Mike Garson loose and lets Bowie show some emotion. Under Pressure allows bassist Gail Ann Dorsey to show her vocal prowess, as she handles Freddie Mercury’s part with kid gloves – not my favourite Bowie song but definitely a high point of the show.

Sometimes, the old songs didn’t fit the new band very well; Ashes To Ashes was a pale ember, while Changes seemed to slip like quicksilver into thin air. Life On Mars, however, was triumphant.

Visually, Bowie kept it linear, with one wide screen behind the band, and a second screen above the crowd, giving us close-ups of Bowie’s bone-structure. He strolled suavely along a raised walkway for Bring Me The Disco King, and jumped around on it for Hallo Spaceboy.

This multi-dimensional show ended with a trilogy of Five Years, Hang On To Yourself, and Ziggy Stardust, all from his seminal album, The Rise and Fall of Ziggy Stardust and the Spiders From Mars. What a starman