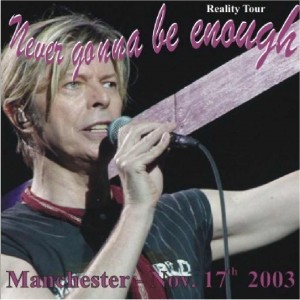 David was in fine voice and had a bit of fun early on by teasing the audience for the less than energetic reception. He apparently joked that he was just back from Europe, and that Manchester had a lot to live up to, before delivering a rallying cry along the lines of: “C’mon kids, wake up! Your grandad?s here…” or words to that effect… .
I know the accuracy of that will be contested, as I’ve already been given several versions of what David actually said.
Anyway, the crowd soon rose to the occasion and it seems a top night was had by all.
Again the 23-song setlist was identical to that of the previous two shows and here it is: