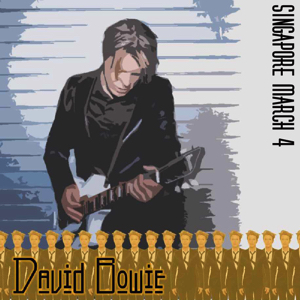 The show itself is great and this is the reason why I decided to make this remaster. David is talking a lot to the audience who is (like most of the other audiences of the tour) is responding well. Only when Bowie tries to stimulate the crowd to sing along to China Girl this fails completely and the song is stopped after some seconds. Bowie takes it with humour and funnily some songs later in the show Ashes To Ashes again has to be stopped but this time because Bowie misses his entry.
Still David is very relaxed and even makes some allusions about some specialties of the legal situation in Singapore (in particular concerning drugs) not forgetting to point out how harmful the use of drugs is (and who knew it better?).