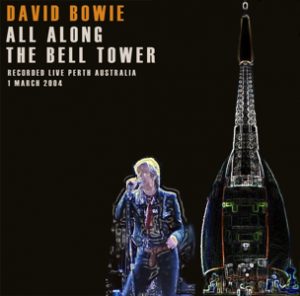 Notes About The Concert:
– The title comes from the fact that, during the beautification of the Swan River foreshore on the the CBD side, a carillon was build at the Barrack Street Jetty which is just across the road from the venue.
– We got the obligatory greeting “Perth you crazy motherfuckers, how are you?”
– During ‘Fame’ the stage lighting went out, leaving only the follow-spots. Bowie makes mention of this.
– At the end of ‘The Loneliest Guy’ a woman a few seats away from me started blowing bubbles. The security goons started closing in but backed off when Bowie said “I like this kind of shit”.
– Having attended both the Sydney gigs I knew I’d be standing for the whole gig in Perth. My feet started hurting about 5 songs in and were knackered at the end of the night. However, considering where I was in the audience – just at the end of the catwalk where Bowie spent a lot of time – I was totally mesmerised and didn’t feel the full effects of the pain until the end of the gig.
– I’d like to take this opportunity to again thank Bowie Downunder 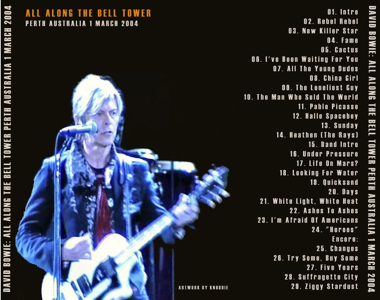