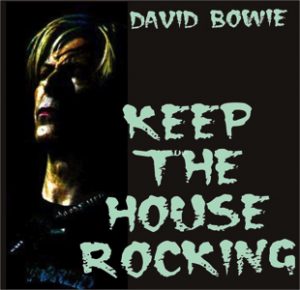 On his recent stop through Milwaukee during the second leg of his extremely well-received Reality Tour David Bowie proved that some things just keep getting better with age.

Clad in shabby / chic buccaneer attire with a head of hair that even an 18-year old would kill for, the 57-year old rock legend has somehow managed to successfully cheat both time and age, Looking even younger and more fit than the last time he performed in Wisconsin (and that was fourteen years ago), Bowie wowed the sold-out crowd at the Milwaukee Theatre with songs from his illustrious forty-year career (he did, after all, cut his first single “Liza Jane” way back in ’64).

David Bowie Bowie’s return to the stage was to promote his latest album Reality, of which, surprisingly, only three numbers were performed. The singer and his six-piece quartz synchronized rock band tore through two upbeat rockers from that album (“New Killer Star” and a cover of Jonathan Richman’s “Pablo Picasso” complete with Spanish guitar flourishings) before unveiling the sparse, barren number “The Loneliest Guy,” where the singer’s vulnerable, yet hypnotic vocal delivery coldly hovered above Mike Garson’s foreboding piano and guitarist Gerry Leonard’s unsettling sonic ambience. Likewise, two of the numbers performed from his previous album Heathen, “Sunday” and “Heathen (The Rays),” which ended with a splendid solo from longtime Bowie guitarist Earl Slick, continued in a similar slow, but intoxicating vein.

Offsetting these newer and decidedly more remote numbers David also treated his fans to many major hits, cover songs and unearthed gems. Stepping on the gas, Bowie and company ran through obvious crowd-pleasers such as the show opener “Rebel Rebel,” “Fashion,” “Ashes To Ashes” and “Under Pressure,” which showcased the breathtaking talents of bassist Gail Ann Dorsey superbly tackling the acrobatic vocal skills of the late Freddie Mercury.

Other welcome Bowie concert staples were present as well, “Heroes” started off as a rawer, more stripped down version before Slick’s guitar eventually injected a power station full of energy into the number. Prior to the band’s pounding version of the Velvet Underground’s “White Light White Heat” Bowie proudly admitted “I’ve been doing this song ever since 1967 and I’ll probably always do it.” And why not, when it – like the performer himself – just keeps sounding better on every tour.

Although the ‘man who fell to earth’ may have somehow side-stepped the whole aging process, his audience, on the other hand, didn’t afford such luxuries. The streaks of lightning-bolt grease paint on the faces of the glam boys and glitter girls that worshipped Bowie’s alter-ego Ziggy Stardust in the early ’70s had now given way to streaks of gray. Crow’s feet and hair color aside, the one thing that’s been constant with his fans throughout the years, however, is their hip quotient. In fact, you’d be hard-pressed to find any well-established rock act with a cooler, more creative lot than Bowie.

Thankfully, Bowie kept many of these older fans in mind as he ran through lesser-known beauties such as “Quicksand,” “The Supermen,” “The Man Who Sold The World” and a deliciously funked-up Euro-trash take on “Sister Midnight” – a song that (along with the more familiar “China Girl” performed that night) he co-wrote with Iggy Pop back in ’77 for Iggy’s The Idiot album.
Showcasing his Ziggy-era, the performance was highlighted by the slashing glam anthem “All The Young Dudes” before the band climaxed with a blistering three-song encore from, quite arguably one of the strongest albums in Bowie’s whole dresser, The Rise and Fall of Ziggy Stardust and The Spiders from Mars. While Slick delivered fiery leads that humbly paid homage to original Spiders’ guitarist Mick Ronson on the revved-up “Hang Onto Yourself” and high-octane rocker “Suffragette City,” it was the song “Ziggy Stardust,” and, more importantly, the singer’s own outstanding vocal strengths and captivating stage presence that perfectly capped off the evening.