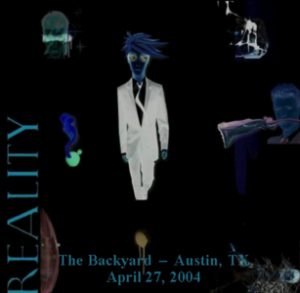 Flaws:
– Crowd noise is a bit high during Rebel Rebel (But who can complain? What an opening song!)
– There were some shorts or something happening with my recording equipment sporadically. This caused a dropout in “Cactus” that was partially fixed by boosting the volume via GoldWav. I also noticed a boost in the treble (again, like a minor short “fixed itself”) after “Slip Away.”
– I forgot the clips that I was going to use to attach the mics to my hat, so the mics were kind of stuck behind my ears, wedged against my glasses frames. As a result, there is some occasional noise from adjusting the mics.

Don’t let all of this scare you, though….the recording came out *great*!

The Backyard, April 27 “This ain’t rock & roll … this is genocide!” Murder is right. On the eve of its 30th anniversary reissue, Diamond Dogs’ opening exhortation translated into two hours and 20 minutes of hard, uncompromising rock & roll from David Bowie under the half moon at the Backyard. Call it the Serious Half-Moonlight tour. Stepping center stage in an outfit nicked from Pirates of the Caribbean (or Adam Ant), the ageless 57-year-old didn’t waste much time on his opener, Diamond Dogs’ clanging “Rebel Rebel.” Instead, he let longtime sideman and Texan Earl Slick, who’s been with Bowie since 1974’s Dogs, and Dubliner Gerry Leonard do all the gnashing of teeth – with guitars. “So … Austin,” drawled Bowie. “You crazy motherfuckers. How ya doing?” The 5,000 strong that had sold out the show faster than a falling starman went canine. “New Killer Star” from last year’s Reality followed, and between that album and its superb predecessor, Heathen, a lush throwback to Bowie’s late-Seventies Low, they provided almost an entire LP’s worth of set list.

The raging “Battle for Britain,” off 1997’s drum and bass overload Earthling, kicked into Trent Reznor gear, giving way to “something you know,” sing-along “All the Young Dudes,” an impression of our Congress Avenue bats (“What secrets Austin has …”), and Let’s Dance twofer “China Girl” and “Modern Love.” The singer was boyishly playful all evening. Nirvana was reached on “The Man Who Sold the World” and with another stomp-time guitar overload, “Hallo Spaceboy,” whose white-light cacophony made one appreciate that this sound and vision was built for bigger arenas.
The tolling buoy bells of Heathen’s “Sunday” and its 9/11-inspired title track (“steel on the skyline, sky made of glass”) set up “Under Pressure,” with bassist Gail Ann Dorsey inhabiting the late Freddie Mercury’s vocal part like a specter. Bowie’s backing sixpiece was as tight as his last facelift. Ziggy Stardust-era “The Superman,” the ripping “Reality,” “Ashes to Ashes,” and Hunky Dory’s acoustic-lined “Quicksand” brought the performance to a head. “If anyone sees Daniel Johnston, give him my love,” quipped Bowie before a heavy metal “I’m Afraid of Americans” and the chugging, T-Rex echoed “Heroes” ended the main set. Reiterating one last time that this was no hits tour – he retired those many tours ago – Heathen’s “Slip Away” kicked off the encores with the evening’s openers, Dallas’ Polyphonic Spree, exchanging their whites for multicolored robes and choral duty.
Polyphonic frontman Tim DeLaughter got the opportunity of a lifetime singing a verse while Bowie sat Cheshire-like on the lip of the stage. “Now put all those dresses back in my wardrobe,” Bowie ordered upon their exodus, then strapped on “Hang on to Yourself,” introduced as concerning a “fag limey Kabuki alien.” “Suffragette City” and “Ziggy Stardust” rocked goodnight to the quartet of former Thin White Duke aliases. Santo & Johnny’s languid “Sleep Walk” came on with the lights, a perfect lullaby to the dream from which Austin had just woken.