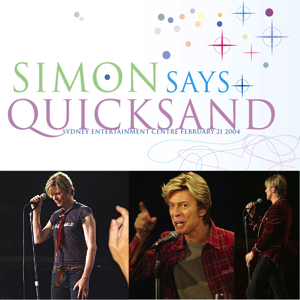 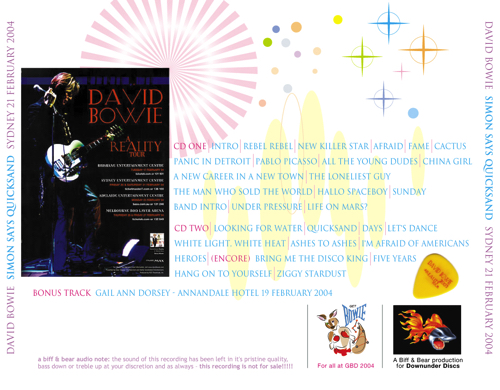 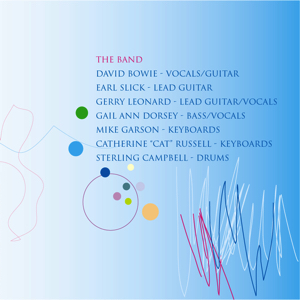 Info: Bowie DownUnder
This night was similar to the first in that it started with ‘Rebel Rebel’ and ‘New Killer Star’,however, those lucky enough to witness both concerts, may have begun noticing the band’s ability to add and drop songs from only the third song in.

Following ‘Afraid’ (from 2002’s Heathen), Bowie then played ‘Fame’ and then ‘Cactus’ which drew the announcement:

“That was a song about a dress. You wait until I start the songs about the women”.

He then followed with:
Panic in Detroit * from 1973’s Aladdin Sane
Pablo Picasso * the Jonathan Richmond cover from 2003’s Reality*,
All The Young Dudes 1972 single written for Mott The Hoople,
China Girl *, from 1983’s Let’s Dance
(* = brand new to the downunder portion of the tour)

Someone in the audience then captured Bowie’s attention:

“There’s a goth girl ….. look I’ve got a goth girl in the audience. Hi darling. How you doing?

During the band intro, Bowie kept the professor joke running from the previous night. Now Catherine Russell was introduced as a leading professor in Quattrocento Italian history!

Bowie then played ‘Under Pressure’ with Gail Anne substituting for Freddy Mercury (a momentous task but she does extremely well at this).

Seventeen songs in came the biggest surprise of all …. and with Mike Garson’s introduction of two alternating notes on a vibraphone, we heard the the debut of ‘Quicksand’ on the Reality tour.

The song ‘Days’ was then followed with another surprise:
“We haven’t done this for weeks. I mean weeks! Seriously, that’s a long time for us”.

Then in a lower tone (and perhaps in recognition of the original video and the recent Aborigine riots in Redfern):

The band then launched into an extremely powerful version of ‘Lets Dance’.

Bowie then played the Velvet Underground’s ‘White Light, White Heat‘ which he described as being from “a million years ago”.

Before commencing the next song he announced “this is not quite a million years old but it ….. (points to the sky) …. starts up there” . Queue ‘Ashes to Ashes’.

” I heard a really good version of that song ‘Ashes to Ashes’ – kinda hip hop by an Australian artist, I think her name was Danielle Spencer. It was really very good”.


As it so happens, Danielle Spencer and her husband Russell Crowe were spotted keenly observing from the stalls.

As of 2009/10, Danielle has gone on to release a second album titled Calling All Magicians, produced by none other than legendary Bowie producer, Tony Visconti.

“I would also like to very much thank Something For Kate for doing such an excellent job in Australia. (mock Australian accent…) A really good band. We’re gonna keep ’em for the rest of the tour”.

Two more songs to finish up the main part of the concert – ‘I’m Afraid of Americans’ and the 1977 classic ‘Heroes’. Before leaving the stage, DB announced:

“We’ve had a wonderful, great pleasure being here in Sydney. Some of the band have never been here before and they’ve had the most excellent time”.

Returning for the four song encore – audiences were in for something quite different….

Pianist Mike Garson now back in the limelight as Bowie launches into ‘Bring Me The Disco King’ backed by Sterling Campbell’s shuffling jazzy beat.

This potentially foretelling piece of music (“soon there’ll be nothing left of me….nothing left to release”) was played for the first and only time on the AUS/NZ tour – something quite special whether audiences knew it or not.

Finally, an unstoppable all-Ziggy trilogy to finish things up: ‘Five Years’, ‘Hang On To Yourself’ and the closer ‘Ziggy Stardust‘.