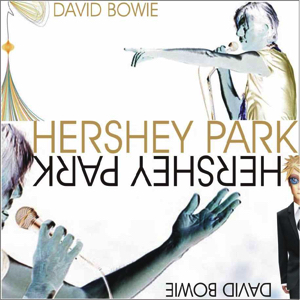 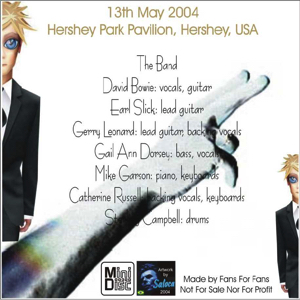 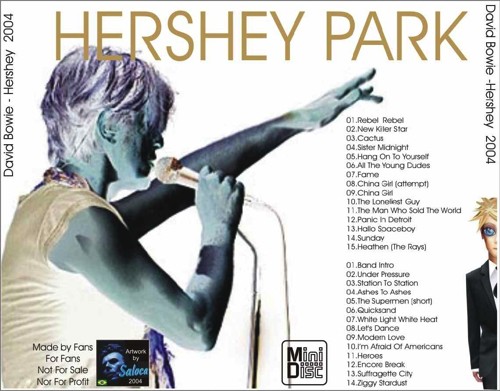 OMG HERSHEY WAS INCREDIBLE!!!! I was prompted to write to you for Gwn and MandN and Nazzz66 and myself because we have spent the most incredible day alive at Hershey Park riding rollercoasters (except for Nazzy who got picked on by Bowie for being the “kind of person who would vomit on one of those things” and being the “kind of person he … “really” wants at his shows” wink wink. so .. riding rollercoasters, eating chocolate, and David Bowie all in the same day with some incredibly wonderful bowienetters made the PERFECT PERFECT DAY!!!
Not to mention that David himself ROCKED the house tonight!! A set list packed with tons of oldies, but none-the-less VERY VERY GOODIES such as Sister Midnight, Station to Station, LETS DANCE!! and MODERN LOVE!!! I was a little blown away!! As Gwn put it, ” I nearly came in my pants when they started Station to Station!” and I don’t think there was a dry seat in the house!!!
A little special note was when he saw Peanut’s 9 yr old daughter Sarah in the second row with her lil sign and her screaming Supermen, and he said… “you’re a lil young to appreciate that one” then they broke into The Supermen, only about 8 lines into the song he quits, slamming the mic down on the stage … only to start back up with a beautiful Quicksand.
Golly, no one could have asked for a more perfect night!!! We were all completely blown away!!!

Review Hershey Hershey ? THE BEST DAY EVER!!! By mandn

WOWOWOWO!!! WHAT A DAY!! Rollercoasters, Chocolate and BOWIE!!
It was just such a great day! We got to the park around 11am or so. Hit the rollercoasters right away! Had a bite to eat and then back on the rides. Made sure to hit the log flume for a quick rinse off before the park closed and then changing in an amusement park bathroom isn’t quite as much fun as one would think. But it worked, we looked great.
And boy did we get Bowie last night! From the classic opening of Rebel Rebel, not the jazzier one we are used to, to the last note of Ziggy!! An unbelievable setlist!! Panic in Detroit AND Station to Station!!!!! I never thought I would hear those two songs in the same setlist again.
David was in a fine jocular mood last night. Laughing and joking with the crowd. Pointing to the newest monstrosity of a rollercoaster at Hershey Park and asking if anyone had gone on it today, of course we had. SO we raised our hands, to which he asked, “Anyone throw up?” Nazzz66 raises his hand and David replied, “Now THAT’S my kind of fan!” He was also making chaos theory jokes for Physics Day, which it was at the park.
We did our part by contributing Bowie Beach balls for the crowd’s fun. When one made it up to Daivd, he said “don’t ever fuck with an Englishman and a beach ball.” then he gave it a good hard kick!
There seemed to be some new changes and riffs in each song last night! It was truly unbelievable. Everything sounded new and fresh, and we are all exhausted!
China Girl, Modern Love and Let’s Dance, the last one he sang for some very lucky woman’s birthday. “Happy Birthday Lady!” and adding that “well, if we’re gonna play that one, we should do it now as it won’t sound any good after what we were going to play.”
A nice teaser of part of the The Supermen and then into Quicksand. When someone yelled out Width Of A Circle, David asked “Do you know how to play it? No? Well, neither do we, so we’re fucked! ”
David and everyone were in fine form and loving every minute of it. The music was superb, the venue was awesome and there couldn’t have been a more memorable night if I tried to think of one.
BTW, I forgot to mention how much I LOVE THE STEREOPHONICS!!!!!! Been so looking forward to seeing them and they were better than I could have imagined. I woke up to them this morning too so it was a nice little way to complete the circle.
Their set was really a treat and some ass kicking testosterone guitar! it’s about time! Thank you everyone!.
My most abundant thanks go to David and the band and all my BNet friends who helped make such a magical day come to life!