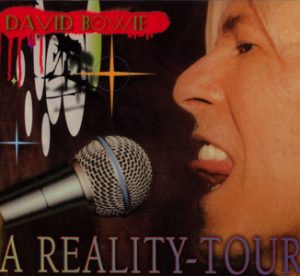 The Frankfurt show was the 7th show proper of the hugely successful globe-trotting ‘A Reality Tour’ and this still available release is a very good stereo recording made from a clearly awe-struck audience. Sound balance is fine and although the sound is a little reverb heavy and ponderous it is still a very enjoyable experience with a high degree of clarity and each of the musician’s contributions is presented in a realistic fashion.

Bowie’s last two albums, Heathen and Reality were both critically acclaimed and this seems to be what convinced him to undertake such an enormous tour of arenas where fans of all generations were treated to a Smörgåsbord of songs from one of rock’s greatest back catalogues. His performance here is one of complete control and brimming with authority. He seems happy with his own myth and seems to have conquered his demons. On this tour the shows were often of mammoth length with the set divided into thirds; One third new songs, one third hit songs and one third obscure songs.

Here we get ten songs from Reality and Heathen combined and three from Earthling. Let’s Dance, Scary Monsters and Ziggy provide two apiece and other albums offer just a single track. Bowie had rehearsed around fifty songs so that he could alter the set-list at will and very few songs appeared at every show.

At Frankfurt the usual opening number of Rebel Rebel was dropped in favour of The Jean Genie and the bassist Gail Ann Dorsey remarked in her diary that this was the catalyst for the first exceptional show of the tour. There were to be many more. Other high points include a wonderful straight rock performance of the Velvet Underground’s White Light White Heat and a reworked simmering Mediterranean version of Let’s Dance but really with so many highlights it’s difficult to single any out.

This recording captures the warmth and charm of Bowie the performer and gives the strong impression that he is now totally at ease with his back catalogue and importantly, seems to enjoy performing them as much as the current material.

The wonderful performance combined with very good sound quality is tempting enough but this release is further enhanced by a gorgeous quadrifold ‘fat’ digi-pack with imagery in the style of the official tour artwork.

I believe there are even better shows from this tour waiting to be pressed but in terms of what is currently available on silver, this release is one of the best.