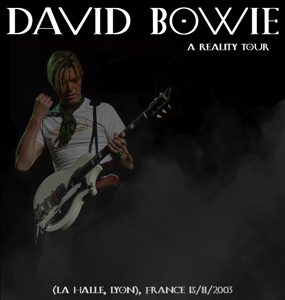 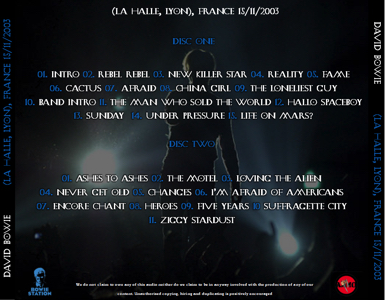 .
Here’s my report of the concert (Christian R. – 2007)
We arrive in Lyon, Halle Tony Garnier around 3:30 pm. some 200 persons are already waiting… It’s quite a lot of people, for this day is Saturday…
We immediately feel that we are observed by some old fans : are we true fans or just curious who see Bowie for the first time ?
On the first rows of the queue I recognize some fans I see at every french Bowie show. You can for sure distinguish them by their erudition in Bowie’s life, trying to teach the new fans the Bowie « religion »…!
Some came only to see The Dandy Warhols, the first part for the night !
Sign of the times, now if you want to know more about some Bowie news , you »ve got to go on the net : the good old fan-club is no more !
I myself don’t have a PC (at that time), so the only way to know a little bit more about it is to ask the guys I’ve mentioned before !
Difficult to hide your frustration when some guys give you flyers to make you visit these sites !