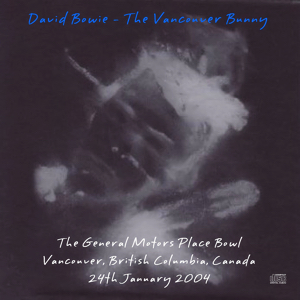 Another great show back to back nights

Fairly similar setlist but it comes of the stage a lot bigger than it did in Seattle. I think Seattle was my favorite of the two but they both have their own highlights. This was in a stadium that was cut down to be a smaller version of itself with some big curtains up. Made it more intimate than most shows at that venue. During this tour there was a fan in the audience who dressed up each night as a bunny and went to a bunch of Bowie stops on that tour (10 maybe?). He makes some comments to her on various nights of the tour which is pretty funny. She happens to be a Vancouver native (Lollipop Shoved!). After this show in Vancouver, she stood stage left as everyone filed out and someone from Bowie’s camp tried to get her backstage. The local promoter (I wanna say it was Clear CHan) would not let him bring more people back that werent preapproved.
After Bowies management failed to convince the promoter to change their mind, Bowie himself came out and started screaming at their reps. He said I am making you guys millions of dollars, you cant tell me what to do, this is my last tour with you guys etc… It was awesome!! Seeing someone so oldschool trying to still connect with fans is sweet. Bowie is one of my musical heroes, hope to see many more years of his music, live or otherwise.
Bowie never has trouble filling in his tour roster, but this is the perfect balance of his old to their new. Gail Ann Dorsey, Earl Slick and a slew of other great players. Cactus shows that dirty Bowie that feels so much like Tin Machine.
The Life on Mars is one of the best ive heard. Halo Spaceboy!!! You forget that Bowie is in his late fifties!..I could go on, but its all worth a listen.