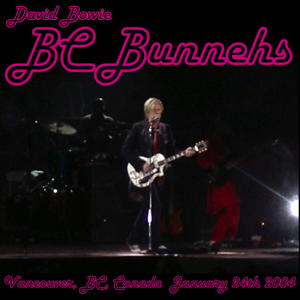 It was a great show

He seemed to be really enjoying himself and interacted with the crowd a lot who responded well.
Bowie never has trouble filling in his tour roster, but this is the perfect balance of his hold to their new. Gail Ann Dorsey, Earl Slick and a slew of other great players.
Cactus shows that dirty Bowie that feels so much like Tin Machine.
The Life on Mars is one of the best ive heard. Blue Jean I had never heard live. 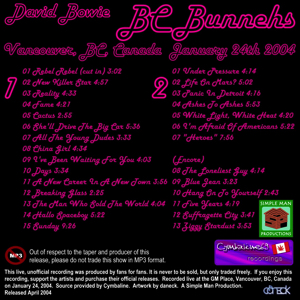 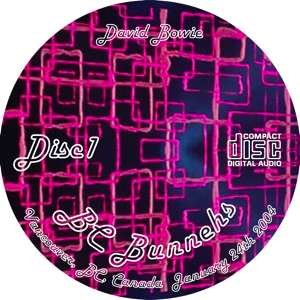 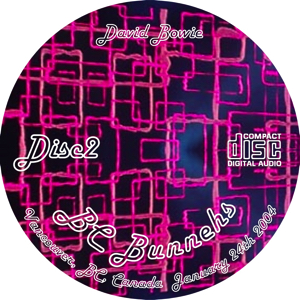 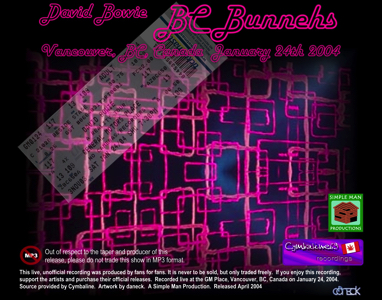 David Bowie’s hardcore fans in Vancouver have had it pretty good over the years, as the late music legend has played here numerous times during the course of his illustrious career.

His final Vancouver show was at GM Place in 2004 as part of The Reality Tour.

Here’s the review from the Taper (Cymbaline69):

Boy, talk about goin’ through ch-ch-ch-ch-changes. Although he’s always been one of the most charismatic rock stars of all time, David Bowie hasn’t always been able–or willing–to connect with a live audience. I recall seeing him at the Pacific Coliseum on the Station to Station tour of ’76, when he was all cold and detached, fully into the Thin White Duke persona.

But at GM Place last Saturday (January 24), Bowie came off as the affable old hipster next door. Whether dedicating a tune to the bunny suit–wearing woman in the front row or acknowledging the presence of the orange-haired Ziggy Stardust clone hamming it up near the soundboard, he built a solid bond with the near-sellout crowd of 12,000. When you factor in that friendly vibe with Bowie’s near-flawless vocals, brilliant band, and smartly executed show, you wind up with one of the finest old-school rock gigs the Canucks’ home rink has ever hosted.

The choice of material didn’t hurt, either. He opened with “Rebel Rebel”, the riff-driven single off 1974’s Diamond Dogs, and the hits just kept on comin’, covering the 30-plus years between “The Man Who Sold the World” and “New Killer Star”, the first single from his smashing new disc, Reality. “Ashes to Ashes” featured the keyboard wizardry of long-time Bowie sideman Mike Garson, who embellished it with a few touches of the same manic, off-the-wall piano work he recorded on Aladdin Sane three decades ago. My fave selection of the night was easily “All the Young Dudes”, the glam-rock anthem Bowie lent to buddy Ian Hunter back in ’72 to help salvage the career of Hunter’s then-struggling combo, Mott the Hoople.

The 57-year-old rocker did his thing on a cool-looking faux-granite stage, his movements broadcast from unusual angles on a row of video screens. There was little to be seen in the way of costume changes, the ever-slim singer spending most of the time in a black T-shirt and runners. Looking even more the black-clad rocker was shades-wearing guitarist Earl Slick who, along with Garson, has been playing with Bowie on and off since the ’70s. (Bowie sings on a track he cowrote with the veteran sideman for his impressive new solo CD, Zig Zag.)

I was hoping to hear Slick’s ominous, feedback-laced intro to “Station to Station”, but it never transpired, and anyone expecting to hear echoes of Stevie Ray Vaughan in his “China Girl” solo had to settle for his decidedly nonbluesy approach. But the Les Paul–toting picker couldn’t help but pay tribute to Bowie’s former guitarist, Mick Ronson, during the six-song encore that included four cuts from the 1972 glam-rock masterpiece, Ziggy Stardust.