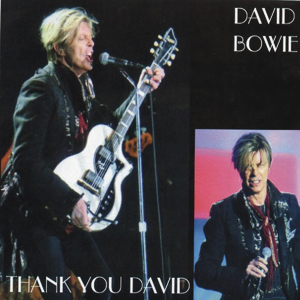 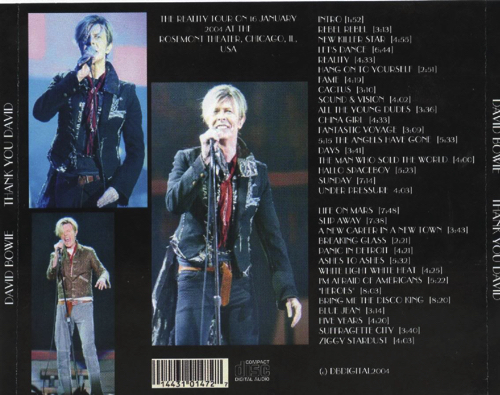 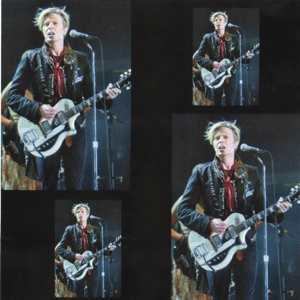 Artists live in a world where their commercial worth is usually only as good as the sales of their most recent release. Most artists who are blessed to achieve a level of success in the music industry usually fall into a trap of attempting to recreate that perfect record time and time again. Even when acts branch out with determined optimism to reinvent themselves, the past is never far behind and everyone from their record company to their manager to their fans is there to remind them of this. Every once in a while an artist emerges who redefines themselves album after album and no act on planet Earth has done this better than David Bowie.

David Bowie is a chameleon and an artist I have always held in the highest regard. Yet until three years ago, I considered myself a casual fan. Bowie has changed his sound and look more times than any other act in the history of rock. He’s never one to rest on his laurels and since his commercial hey day of the 1980’s, he’s turned his back on pleasing the masses, instead seeking personal gratification from his music. For most of the 1990’s and into the new millennium, David Bowie has made numerous albums die-hard fans hold in high regards while the casual fans scratch their heads wondering when he’s going to write another Let’s Dance. I was one of these casual fans until a chance encounter gave me a date with destiny.
In December 2003, I met my future wife and while perusing her cd collection, I noticed she had a David Bowie cd (The Best of of course…but it was the two-disc version so she immediately received bonus points). When I mentioned this, she responded enthusiastically with “I L-O-V-E David Bowie”. Luck had it that the chameleon would be in Chicago in a few weeks for three sold-out shows just outside of Chicago at the Rosemont Theater (whose capacity is a mere 4,500 people). I couldn’t think of a better date and I was lucky enough to score a pair of tenth row tickets for the third and final show on Friday January 16th. I surprised my now wife with the gift by merely driving to the theater without dropping any hints. She was ecstatic with joy when we drove by the theater and David Bowie’s name lit up the sky. This was the night that I feel in love. My wife sung her lungs shaking her body out to almost every song and was all about giving back to the performer never resting on her laurels. What I loved about her reactions was they came from a fan who appreciated this artist and his talents. Not only did I fall for my future wife, but I also feel under David Bowie’s musical spell.
Destiny granted me tickets to this show. Bowie had just begun his American leg of the Reality tour one month earlier and it was receiving some of the best reviews of his career, but the final Chicago area show would prove to be anything but ordinary and prove to be a defining concert experience for me. Bowie’s standard shows were approximately twenty-five songs, but this show came in at thirty-one songs which was one of the longest of the tour and of his entire career.

The intimacy of the theater setting fit this show perfectly as the building enhanced the music. I was able to delve into Bowie’s latter day modern material with gusto because I could see the emotion and expressions with which he was performing these songs. From the opening chords of a reworked “Rebel, Rebel” to the finale of “Ziggy Stardust” Bowie entranced the Chicago faithful with a performance that showed he was not only commanding of the material, but that he still had something to prove. When it came time for “Life On Mars”, after the piano opening, Bowie called off the band. Three years later, I’m not quite sure why, but my gut feeling is because he wasn’t “feeling” it and did not want to call the performance in. The band cheered him on, specially the brilliant bass player Gail Ann Dorsey. Bowie returned to the microphone and proceeded to belt out a tour de force vocal performance I will never forget. It was as if he wrote the song earlier in the day and not thirty-years earlier. Many male singers tend to lose their range as their approach their mid-thirties, but shockingly Bowie sounds as good as he’s ever sounded from a live perspective and the man was a few years shy of 60. Everything about this evening was taken to another level from a driving “Under Pressure” to a smoking “Suffragette City” to the spellbinding extended encore, the night hit on all cylinders.More than anything else, what I loved about witnessing Bowie live in 2004 was the joy and exuberance with which he gave each performance. He appeared to be at peace with his legacy, his place in the music industry and who he is today. The most spellbinding aspect of this concert was that I didn’t just go home wanting just to buy Ziggy Stardust, The Man Who Sold The World or Aladdin Sane but Heathen, Reality, Earthling and Black Tie White Noise as well. The electrifying live performance did not rely solely on hits but what truly was the best of Bowie. While the performance of “’Heroes’” was tour de force, it was preceded by the equally prevailing “I’m Afraid of Americans” (which was recorded with Trent Reznor) which in essence is the flip side to “’Heroes’”, two decades later. “Sunday” and “Cactus” seemed as essential to the set as “Sound & Vision” and “Hallo Spaceboy”. What Bowie managed so beautifully on the Reality tour was partnering the new and old meticulously so to the average fans ears, they sound like forgotten favorites. Many people I speak to have no desire to see Bowie unless he plays his hits and I told them that if they saw the tour in support of Reality they would have witnessed one of the most invigorating performances of their life. The truth is that David Bowie did not get experimental in the 1990’s. He merely continued to do what he has been doing for nearly forty-years; grow. The only difference is that we weren’t listening as closely as we had in previous decades.

I’ve seen a hundreds concerts and for some reason when people ask me the best that I’ve seen; David Bowie is one of the first to enter my mind. Not just because of my beautiful date, but because of the extraordinary performance. I went expecting to see a good show but walked away seeing a chameleon change colors in ways I never thought imaginable. The truth is that Bowie was more adventurous on this tour than he had ever been in his entire career. Even when he pulled out “Blue Jean” in the encore for the first time this tour, it didn’t seem like throwing the audience a bone, instead if felt like Bowie truly wanted to play it and share it with the 4,500 in attendance. Bowie is an artist who understands his fan base, both the fanatical and the casual. He intersected the past and present with flawless precision. He kept momentum throughout the entire concert even fooling many casual fans who believed that certain songs from Heathen and Reality were from his 70’s masterpieces which helped dismiss the notion that everything post Never Let Me Down had little pop flair. The only regret I have is that I was not able to see more shows than the two I saw.

One other item no one gives Bowie enough credit for was how impeccable the routing and staging of this tour was. He very easily could have performed one night at an arena in Chicago but opted to spend an entire week, in January no less, in Chicago performing close to fifty-unique songs and showing that he embodied one of the songs on Reality, “Never Get Old”. He went from theaters to arenas and late in the tour he hit a few sheds. One of the most amazing aspects of the theater tour was that with few exceptions, all tickets including services fees ranges from $40 to $90. This is a steal to see someone of Bowie’s caliber in such a small setting. Compare that to the $125 Bon Jovi charged for their top tickets in stadiums in 2006 and it’s even more impressive. In recent years, as bands have seen their audiences dwindle they have overpriced their tickets to maximize profit, many times taking advantage of their core audience. What most acts don’t realize is that by doing this they will never expand their core base. If Bowie tickets had been $150 a piece, I wouldn’t have even considered going, but they were affordable and I found myself walking out not just a fan but a believer. Before that show I owned two David Bowie compilations, three years later I own well over twenty albums by the most adventurous musician of the rock era.