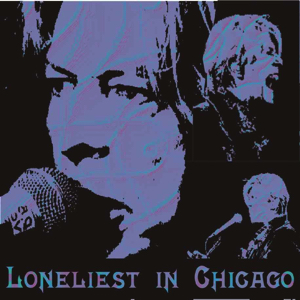 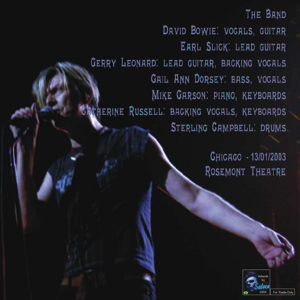 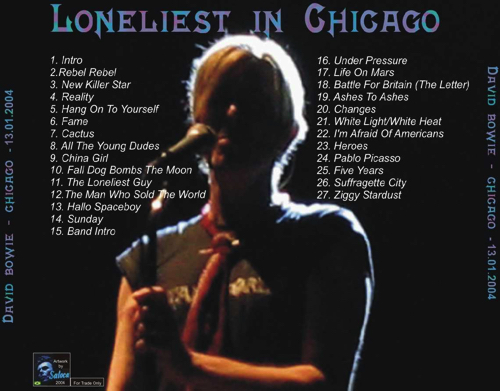 For the first of his three intimate performances at the Rosemont Theatre last night, David Bowie proved exactly why he has one of the most long-lasting, lucrative careers in the music business.

When the 57-year old elder statesmen of rock emerged onto the stage, it was almost shocking to find him appearing some twenty years younger than his actual age. Clad in a tattered black waistcoat, mangy ascot, beat-up Chuck Taylors and black hip-hugging jeans with a ‘how’s it hangin’ belt dangling front-and-center, the slender singer looked like a high-seas buccaneer fresh from pillaging the local Goodwill. Oddly enough (or maybe not so odd at all in Bowie’s case) this hodge-podge of stage attire actually looked quite hip (but, let’s face it, this guy could make a Hefty bag look cool). Of course, this wasn’t the first time that Bowie has used pirate-chic to his advantage (the first was back in 1974 when he donned knee-high boots and a patch over one eye for the promotional video for his hit “Rebel Rebel.”)

David Bowie So not surprisingly, the singer and his band (quite arguably the tightest touring band he’s had throughout his four decade career) opened with a pounding, swashbuckling version of “Rebel Rebel,” which immediately brought the sold-out crowd to their feet, where most managed to stay for the majority of the show.
For some of the older Bowie fans (and there were plenty in the crowd), his omission to perform more obscure material from his own golden years of the ’70s may have been missed, but with a 25-song set that weighed heavily on his greatest hits (songs he swore he never perform live again back in 1990), not to mention a healthy amount of newer material, nobody felt slighted.

But even more than the choice of songs, it was Bowie as the consummate live entertainer that held his audience in his sway. From humorously making light of a couple of mistakes (both from himself and his band) to his unbelievably strong vocal range (no doubt attributed to quitting ciggies a couple of years ago) to his upbeat and jovial interplay with his band and the audience, it was crystal clear that this man was born for the stage. David Bowie While Bowie rightfully commanded the lion’s share of the attention, as he playfully performed a bit of mime throughout the bubbling hot tub of funk on “Fame” and danced in a self-contained state of ecstasy throughout “Ashes To Ashes,” many of the bandmember’s talents beamed brightly next to David’s. Drummer Sterling Campbell’s frenetic, hard-hitting style stood out the most during the three techno injected numbers “Halo Spaceboy,” “Battle For Britain” and “I’m Afraid of Americans,” from Bowie’s late ’90s albums Outside and Earthling, while bassist Gail Ann Dorsey “out Freddied” even Queen’s late singer during her vocal duet with Bowie during a passionate take of “Under Pressure.” Pianist Mike Garson, who originally started performing with Bowie back in his Ziggy Stardust days in the early ’70s, added his complex keyboard flourishings to the arena-rock torch songs “Life On Mars” and “Changes.” Guitarist Earl Slick, another musician who’s been working on and off with Bowie since 1974, proved exactly why Bowie consistently brings him back into the fold. With stinging leads on a delicious take of “The Man Who sold The World” (an early Bowie song which was introduced to a younger audience when Nirvana performed a version of it for MTV’s Unplugged series), as well as channeling the spirit of the late Mick Ronson (lead guitarist from The Spiders From Mars) through a piercing guitar line on the glam-rock anthem “All The Young Dudes,” Slick just may be the most versatile and talented guitarist Bowie has employed to date.

While the new material performed from his most recent album Reality married well with his older songs and was well received by the crowd, it was the ‘wham-bam-thank-you-ma’am’ triple whammy encore from his 1972 album The Rise and Fall of Ziggy Stardust and The Spiders From Mars that worked the audience into a fever pitch. Bowie pulled his adorning fans into the sing-song chorus of “Five Years” before the dam broke with an amphetamine-fueled version of “Suffragette City” and ending on the high-note of “Ziggy Stardust” which climaxed with Bowie exercising his emotive, passion-soaked vocals.
He may have knowingly chuckled (more than likely as an admission to his own approaching years) when he delivered the line, “Pretty soon now you’re gonna get older” during the song “Changes,” but with youthful looks, a commanding presence and one helluva powerhouse of a band, this is one artist who definitely still has time on his side.

Opening for David Bowie was soul sister number one, Macy Gray. With her mile-hile afro, long, flowing gold-glittered gown and football field full of attitude, Gray and her nine-piece backing band performed a rousing set of funked-up soul songs that, despite falling on more than a few deaf ears in the audience, proved an entertaining and energetic foil to the main act of the evening.

REVIEW : Eric Schumacher-Rasmussen
The goosebump moment. Every time I go to a concert, I’m looking for it, though I almost never find it. That moment when song, performer, setting and the circumstance converge to make the hair on the back of your neck stand up—your eyes fill with tears, a wide smile forms across your face. In 17 years of reviewing some 400 concerts, those goosebump moments might only number a dozen or so. R.E.M. at Madison’s Dane County Coliseum in 1987, Bruce Springsteen at Philadelphia’s JFK Stadium a year later, A.F.I. at the Rave in Milwaukee last fall… and now David Bowie in Chicago.

It came at the end of a stellar two-hour, 25-song set, when Bowie and his band launched into “Ziggy Stardust.” I’ve been a Bowie fan on-and-off since the ’70s, but it wasn’t until the moment guitarists Earl Slick and Gerry Leonard tossed off the song’s opening chords that I realized—that riff is part of my DNA now. And hearing it within the context of other classics like “Rebel Rebel” and “Heroes,” along with new tunes like “Fall Dog Bombs the Moon” and relative obscurities like “The Battle for Britain (The Letter),” was a reminder of just how much Bowie’s music once meant to me, and just how good he still is.

People always say Bowie’s like a chameleon, which would suggest he changed his music or his image to adapt to the world around him. But even as he embraced glam’s androgyny with the Ziggy Stardust character or created the coked-up, detached Thin White Duke persona, Bowie was never adapting to anything but his own vision of himself and his art. He’s remained an outsider, even during his most popular periods and this theme of alienation tied together the entire concert. Whether celebrating it in “Rebel Rebel,” confronting its pain in “Hallo Spaceboy” or “The Loneliest Guy,” or reaching out for connection against all odds in “Five Years” and “Under Pressure,” Bowie managed to put on a show that, despite its lack of theatrical trappings, actually revealed more of a narrative thread than some of his more “conceptual” outings (anybody remember the Glass Spider tour?). For the Reality tour, Bowie and his musicians left the drama to the music itself, and neither his voice nor his band—which, in addition to longtime collaborator Slick, includes keyboardist Mike Garson, who played on the 1972 Ziggy Stardust tour—have ever sounded better.

The reason I’d moved away from Bowie’s music as I grew older was that I thought it was too cold, too detached, too emotionless. Bowie’s show reminded me that his music, at its best, is just the opposite: He might sing about junkies in space, about aliens both extraterrestrial and human, but he’s a romantic at heart. He delivered both “Ashes to Ashes” and “The Man Who Sold the World” with a conviction that somehow revealed layers in those songs that had become obscured over time by his own legend.

Which brings us back to “Ziggy Stardust,” itself an act of mythmaking that’s been subsumed by its creator’s own myth. The goosebumps came from—for maybe the first time in almost thirty years—hearing it again for what it is, underneath all the makeup and the sci-fi: a song about human fears and fantasies, and one that just so happens to have one of the most kick-ass guitar riffs of all time