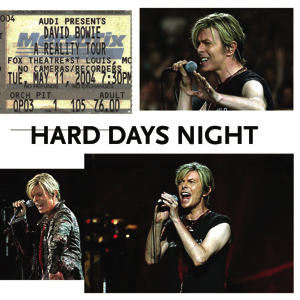 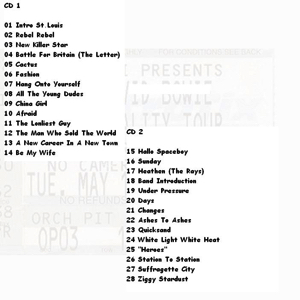 David Bowie’s last St. Louis concert was one for the books
By Kevin C. Johnson St. Louis Post-Dispatch Jan 11, 2016
When news hit of David Bowie’s quiet death from cancer shortly after midnight Sunday, it looked like one of the greatest death hoaxes of all time.
That’s how unbelievable it was to me.
The Hollywood Reporter, a source I trust immensely, was the first traditional media to report it, but it did so suspiciously low on its website homepage initially.

The news was on Bowie’s official Facebook and Twitter, but surely those things had been hacked I figured, and the Hollywood Reporter fell for it.
After all, he’d just released his new album “Blackstar” on Friday, his 69th birthday.
But we all know the sad news of Bowie’s death now, that the kept his cancer private, and that his last album was a well-planned parting gift to fans.
There really are no words to do justice to Bowie and his contribution to music and pop culture.
Instead, I’m instantly reminded of the one time I saw Bowie live at a May 11, 2004 concert at the Fox Theatre.

A show that stands out as great even without my favorite Bowie song “Fame.” The headline “Ch-Ch Changeable Bowie is still the coolest” doesn’t make me cringe too too. And apologies for the review’s first sentence, which in hindsight could have been deleted.

“Concerts by classic-rock powerhouses such as the Eagles, Fleetwood Mac, Billy Joel and Elton John just can’t match the feeling of a David Bowie concert, as proved at a packed Fox Theatre on Tuesday night.

The cult-inspiring Bowie is the ultimate rock star, with a life and career that has included a supermodel wife, bisexuality, drugs, colorful costumes and ever-changing stage personas, and he offers an evening that’s a true event. Other classic rockers tour routinely, which can dull the impact, but Bowie’s latest trek is his first in eight years, giving it must-see status. Featuring a set, sound and scope that seemed to extend beyond the parameters of the Fox’s walls, Bowie’s 2 1/2-hour show joyfully showcased what a vital live performer he remains. At the age of 57, he’s still the coolest person in any room, full of cocksure English swagger.

Looking fit and almost handsome in a mix of denim and velour, Bowie opened with “Rebel Rebel” from 1973’s “Diamond Dogs” album and “New Killer Star” from the new “Reality” CD. The pairing clued in the audience on just how wide the material would stretch, even if the new song quickly drained some of the energy that the older song generated.

“Under Pressure” was another oldie-but-goodie offered, with Bowie explaining that his “Under Pressure” partner, the late Freddie Mercury, couldn’t make it and so bassist/singer Gail Ann Dorsey was filling in. Bowie instigated a sing-along for the still-winning “All the Young Dudes,” and he cheekily strutted around the stage as though he were strolling a catwalk on “Fashion” (wife Iman should be proud).

He paid tribute to the Pixies with “Cactus,” calling it one of the band’s greatest songs. The trippy “Hallo Spaceboy” was a welcome surprise from his “Outside” CD, and “Station to Station,” which opened the encore, was performed for only the second time this tour. He also performed off-kilter ballad “The Loneliest Guy, ” and the melodic “Days” came from his “Reality” CD. Bowie then followed “Days” with a song he promised that everyone knew: “Changes.”

Throughout the night, Bowie was warm, light and humorous. At one point, he asked audience members what their names were.

He launched into a lengthy explanation of “The Man Who Sold the World” before stopping himself and asking, “Why am I going on like this? They (the band) usually stop me.” Later Bowie said he wanted to introduce the band but joked that he couldn’t remember their names.

Let’s hope that fans won’t have to wait another near-decade before Bowie appears in town again — not at his age. But this current tour is one for the books.

Stereophonics opened, demonstrating Bowie’s ongoing respect of new talent. Singer Kelly Jones told the crowd his band was “massive” back home in South Wales, and it looks to be equally massive in the United States. Songs such as “I Miss You Now” and “Help Me (She’s Out of Her Mind)” from “You Gotta Go There to Come Back” made a strong case for the band.

But given the accidental death of a stagehand at concert in Miami last week, Jones’ comment that it had been a good week playing with Bowie seemed odd.”