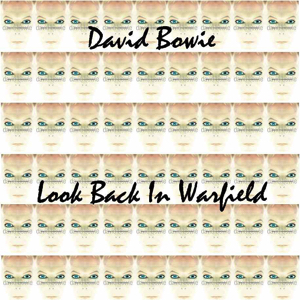 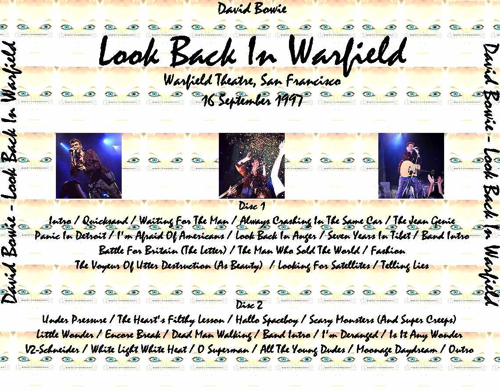 997-09-10 04:00:00 PDT SAN FRANCISCO —
IF YOU have tickets to the David Bowie concerts next week, don’t sell them for whatever the scalpers offer. If you don’t have tickets, offer big money. Bowie’s concert Tuesday night at the Warfield is right up there with the top shows of the year. The chameleon can rock.

Featuring a lot of tunes from Bowie’s latest album,

“Earthling,” the event was just as loaded with Bowie standards. With guitarist Reeves Gabrels laying down some of the meanest, muddiest, most feedback-laden work since Carlos Alomar of “Heroes” fame, the band rocked through some of Bowie’s hits with panache to spare. The question going into the show was whether Bowie, he of the quick-change personality, was going to try to become Electro-Bowie, capitalizing on the current Chemical Brothers, loop-driven Euro Hip style. Certainly

“Earthling” is a bit too techno market-driven, but it still rocks, a kind of “Heroes” for the ’90s. It’s phenomenal that a 50-year-old man can still command center stage, as lithe and limber as Bowie, who was in extremely fine voice in the early stages of his current tour.

Taking the stage in a white tunic over white trousers, holding just an acoustic guitar, Bowie led off the show with “Quicksand,” before bringing the band out for a raucous, if somewhat misguided, “Waiting For the Man.” As much as Bowie may be connected to the hip with Lou Reed, he didn’t quite pull off the old Velvet Underground song, one of surprisingly many Reed-influenced tunes of the show.

Bowie’s misses didn’t much matter, as they weren’t anywhere near clunkers. Not being the best at a tune doesn’t translate to not being good. And it mattered less when Bowie immediately followed up with a blues intro to

“Jean Genie” that he and Gabrels soon took to a full-out barn burner.

Bowie could sell out much larger venues such as the Shoreline Amphitheatre without a moment’s notice. Seeing him at the Warfield, with its 3,300-person capacity, may be a once-in-a-lifetime treat. You get to watch his face as he laughs through “Fashion,” striking poses with self-irony that would be lost if projected on a large video screen. You get to watch him doing his little, shake your hips, mini-Bowie-dances that still catch the eye no matter how much gibberish is projected onto the large canvas screen behind the stage.

What seemed most evident about Tuesday’s show was that Bowie was having a whole lot of fun. He has confidence in his band, which, along with Gabrels, included bassist and vocalist Gail Dorsey, drummer Zachary Alford and keyboard player Mike Garson – the same crew that staffed the “Earthling” record.

So what did the fun boy play? Well, I could run off the entire set list of his 22-song, two-hour concert, but some of you unscrupulous types out there might use it for wagering purposes, and we can’t have that in this anti-gambling state. It is safe to say that, should you attend the Warfield shows on either the 15th or 16th of this month, it’s quite likely that you might hear such killer Bowie songs as “Fame,” “Stay,” “Scary Monsters,” “Look Back in Anger” and “Panic in Detroit.”

It may have been the last tune, performed about five songs into the mix, that really let the crowd know that this was a Bowie show, not some kind of Bowie incarnation. The king of personality changes – through the whole Ziggy Stardust, Alladin Sane, Thin White Duke, Whatever I Am Now phases – often lost the music in the image. Tuesday, the music took center stage, with Bowie comfortably astride it.

There were poignant moments as well, as when bassist Dorsey, a fine vocalist, was forced to assume the Freddy Mercury part in “Under Pressure,” the song Bowie performed so well with the late Queen singer. There is only one Freddy Mercury, rest his soul, and you could have had damn Pavarotti out there trying to sing those lines and it still wouldn’t have worked.

Still, as the song says, “Love dares you to care for the people on the edge of the night.” If Bowie has not taught us anything else, in his resplendent, ambi-sexual persona and his wonderfully prolific career, that should be enough.<