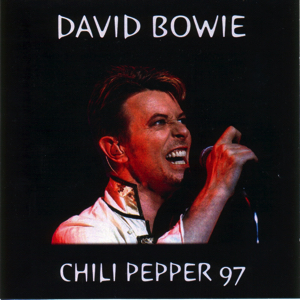 I had played the tape I’d made of “Earthling” on the trip to South Florida to minimal response. It was only the second time I had listened to it, for that matter. We arrived at the venue and immediately set about finding someone who wanted a ticket. Many wanted two, but after ten minutes, one lucky person walked away with a ticket and we had an extra $40 in our pocket. It was twilight as they began letting people into the modest venue. We jockeyed for position not too far in front, but not too far back, either. When the Goldilocks Effect® went into play we didn’t have to wait very long for the show to begin. There was no opening act and in fact, it started a bit earlier than the 8 p.m. door time printed on the tickets. Bowie came right out and asked the audience if they wanted a long set or a short set. Well, you could imagine the audience response. What we could not have imagined then was the band’s response.

The band that night was the same one that we had seen on the Outside Tour two years earlier. If it was a real gift getting to see Mike Garson play in an intimate environment like this one, then the effect of seeing Bowie relate to his audience and the music in a space where he was only 25 feet in front of you was a revelation. The human scale of the show was the furthest thing from the hit-the-marks professionalism of the earlier shows I’d caught in 1990 and 1995. As adequate as they were, they were acts of commerce strained through the art filter. This, instead, was an act of communion and good fellowship. It was radically different seeing David Bowie really having a good time at his own show.

The concert started out acoustic and low energy to work up to a frenzied pace by the end of the first set. The music morphed from acoustic rock into art rock before taking off toward the drum and bass that had informed his latest album. When it peaked with “Little Wonder” the band left the stage but told us that it was only a “bathroom break.” Sure enough, they were back in a minute or two and began the first encore with my favorite “Aladdin Sane” song, “Panic In Detroit.” I was surprised to hear “V-2 Schneider” even in its compromised Dao Jones Index version, but what really seemed unprecedented that evening was the excellent cover version the band did of Laurie Anderson’s “O Superman.” When the laughing loop started off the song, I was thinking “it can’t be…” but it was. Bassist Gail Ann Dorsey held the lead vocals; giving her the lead mic for the second time that night following her duet with Bowie on “Under Pressure.” The next two songs were a raucous “White Light/White Heat” followed by my favorite “Ziggy Stardust” track, “Moonage Daydream.” Not a song I could have ever imagined hearing! Surely that was the evenings end as the band exited the stage? 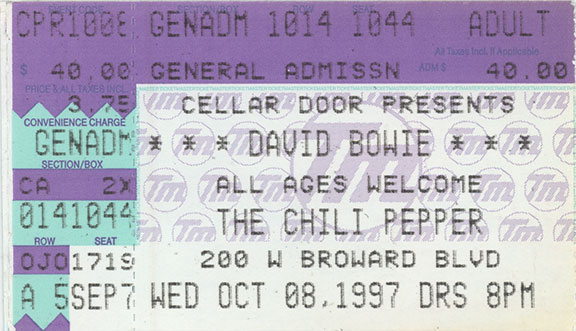 Not by a long shot! They were quickly back as they proceeded to play another ten tunes. I’d seen The P-Funk All Stars play a three hour set before but this was going to put even that into the shade. They opened with the vivacious “Queen Bitch” and managed to serve up a Tin Machine track that Bowie had really taken a shine to [“I Can’t Read”]. The one tune from the new album that taxed me live was the enervated “Telling Lies,” but that was followed by the always righteous “Look Back In Anger.” Another song that night I could not have imagined hearing was the taut and dynamic “Stay” from “stationtostation.” By 1997, the popularity of Nirvana’s cover of “The Man Who Sold The World” had given the song a new lease on life that managed to eclipse it’s old lease, so it was not a surprise to hear it out in the world. Finally, at thirty six songs in, the band gave up a killer All The Young Dudes” that managed to make us forget Mott The Hoople for once.

Then the band really did leave the stage but only after they had exhausted 36 of the 37 songs they had rehearsed for the Earthling tour. The only one that they did not play was “I’m Deranged” and the reports of those who had gotten there early enough to have snapped the photos that began this post revealed that they had played it during their soundcheck, so they might have gotten confused three hours into this marathon. One could forgive them for maybe thinking “didn’t we play ‘I’m Deranged’ already?” Besides, I had seen that performed on the Outside tour.

The fact is, that after the two hour mark, I was prepared for the show to end at any time and when it didn’t, each song played became akin to a special event of a sort. The thousand people in the sweaty confines of The Chili Pepper got to see the crack band doing excellent work and the guy with the biggest smile on his face of all was probably David Bowie himself. He had successfully achieved his aims of jettisoning his 80 world-straddeling pop baggage and integrated a set comprised almost 40/40 between 70s classics and deep cuts and his modern output; along with well-considered and surprising covers and experimentation like the “Is It Any Wonder” version of “Fame” filling in the cracks.

The next day we could still not believe what we had been given. My friend Elisa had never seen Bowie before [she also passed on the “Glass Spider” tour in 1987] in spite of being a huge fan, so that was her only show ever, but like the man says, it was the show to see if you’re only having one! After this concert, I only ever could have seen the “Reality” tour before all the live shows ended for Bowie. I don’t think I could have gone backwards in an arena of thousands of peopleoids with Bowie a small speck onstage trying his level best to project to a vast, dark amoeba of an audience. No, my history of Bowie concerts began large, and impersonal and by the last one, had concentrated their essence to become an impossibly intimate celebration of the best that Bowie had to offer with none of the false steps that had plagued the 80s. That it had been successful could be seen on the beaming face of the man himself.