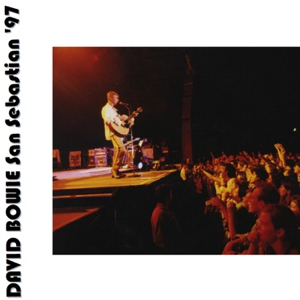 Bowie played in San Sebastian in July 1997 in Anoeta Velodrome not finished filling: only 5,000 people attended that concert.
The musician arrived in the evening from Zaragoza, where he acted the day before, made a brief soundcheck and rested until the time of the concert. 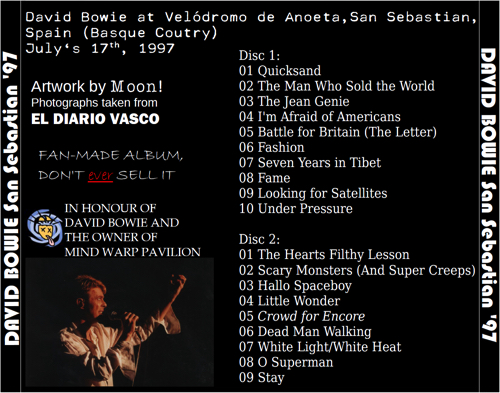 It was an intense recital, that their local fans remember powerful ( “an overview of the whole of his career”) although there were those who felt “frustrated” because that Bowie took the stage, aesthetics with marbellí dot (see photo the left of Lusa partner), had little to do with the idealized on your turntable. Rock timekeepers certified that the San Sebastian concert lasted a quarter of an hour less than in Zaragoza. And that hurts the ñoñostiarra corazoncito, huh?

But the funny thing was the post-concert party alleged that then also became urban legend and now, fifteen years later, relativize their own players.
Phoned Isabel Azkarate, the great photographer. Tell me the mythical donostiarra party !, Bowie ask. “But it was something very discreet!” Answers. “The musician was a friend of the painter Julian Schnabel. After the concert Bowie wanted to go to the town of Julian in Igeldo to see his latest works. We were a group of friends, among whom was Juan Cruz Unzurrunzaga, we took some pictures and take something, maybe it was Txakoli “.

A few ‘divine’ donostiarras cultureta attended that party. But Bowie retired early to follow his ‘tour’: the next morning flew from Hondarribia to Madrid and from there to London. He left behind a Saint Sebastian where rumors about a ‘secret party in Igeldo’ that, according to the memory of those who lived, was not that great … What a pity: the glam long passed again by the Easo recoleta.

Years later, in 2001, in one of the ‘promotion guateques’ the Film Festival San Sebastian rode Schnabel’s house in Manhattan, Bowie and his wife Iman came to support the Zinemaldi. “Of course I remember San Sebastian, would love to return” say that Bowie said in that old factory Manhattan reconverted house Schnabel (pictured, singer with his wife Iman, the painter himself and Mikel Olaciregui, then director the San Sebastian festival).

Yes, the album out in March, after a decade of silence. Bowismo militants optimism and trust that will tour. And say a concert in San Sebastian close the circle.

Been you at that concert in Anoeta in 1997? Tell us, come. And so we saga time until the record …