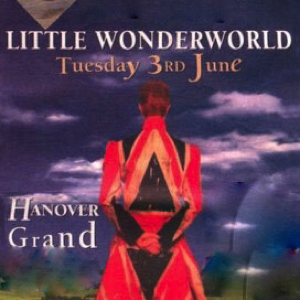 This was the second of the “secret” rehearsal gigs that sold out in moments.

REVIEW GIG OF A LIFETIME
I have been to many, many live shows over the years, and even hosted my own garden party which among other performers included Teenage Fanclub’s Norman Blake, Pearlfisher David Scott , the BMX Bandits , Cosmic Rough Rider Daniel Wylie and Belle and Sebastian’s Stevie Jackson, all of whom played over half an hour sets. Guests included half of XFM Scotland and legendary producer Don Fleming, who produced ‘Bandwagonesque’ for Teenage Fanclub and also records for the Posies, Sonic Youth and Hole. All of this took place in the 25 degree heat of summer in Glasgow. A somewhat unusual occurrence, believe me!

I’ve also seen Ash, Athlete, Editors, the Datsuns and Simple Minds in very intimate settings such as King Tut’s and Mono, the Clash as early as 1978 and T-Rex and the Sweet when I was very young at the legendary Apollo Theatre, but nothing compared to the stroke of luck afforded to me with my Gig of a Lifetime, which I got into for free.

I had a call from a close friend who was a Bowie fanatic, and who with his gang of obsessives followed Bowie all over the world and frequented as many gigs as physically possible. This might include heading over to New York just to see the great one perform for, say, ten minutes or so. They had blagged via Bowie’s fan club guest passes to the tiny Hanover Grand just off Regent St in London’s West End and one of them couldn’t make it. Would I like his place? I was living in London at the time and, yes, please I would! The trouble was I had recently broken my tibia fibula and had a double ankle fracture, so was on crutches and a non-weight bearing plaster. I had been told just to keep my head down, not make a fuss and I’d be fine. Oh, and my name on the door was Roy Rogers ! – You couldn’t make it up.

As I hobbled up to the door, the bouncers looked at me and I informed them I was on the guest list. “Name?” came the reply from one of the brutes. “Roy Rogers,” I replied, cueing much tittering. “Sure, it’s not Hopalong Cassidy?” “Where’s Trigger, Roy ?” replied another, and finally another guffawed, “Hope you ain’t brought Bullet because he isn’t getting in, mate. Ha! Ha! Ha! Ha!” There was lots more laughing from them as I tried to ‘keep my head down.” Coolness was required….but I was in!

I couldn’t believe the place was tiny inside. Touts were asking mortgage payments for tickets outside, and loads of Bowie obsessives were locked out. I thought about them for a second, laughed to myself and settled down for the action.

This line up was rehearsed and ready for the upcoming ‘Earthling’ tour, and the two London shows in the Grand were warm ups for the now legendary Bowie’s 50th birthday gigs in New York City. Featuring Reeves Gabrels on guitar and the amazing Gail Ann Dorsey on bass, I was not sure what to expect as Bowie had previously ducked playing the classics after his infamous battle with Mainman management over royalties. Now Bowie, however, had the rights back and had leased out his future royalties (Bowie bonds) for $55million to the Pru for ten years in what was a nice bit of business. Would he be including his back catalogue hits to the live set? You bet that he would!

The support act was a young electronic genius Talvin Singh who went on to win the Mercury Music Prize with his debut album ‘Ok’ in 1999. Bowie also played an entire set of drum and bass, and then did a much longer conventional couple of hours in this tiny venue. I had supplied the Bowie gang with six tickets for the incredible Tin Machine show at Glasgow Barrowland a few years before in 1991, so I had earned this one. I had also witnessed Bowie at Murrayfield Stadium in Edinburgh for the ‘Let’s Dance’ tour. He was a tiny speck at which I felt he might as well as have been on Mars, but now I was only 20 feet away I could see the white of his eyes . We were treated to such classics as ‘Fashion’, ‘Queen Bitch’, ‘Fame’ as well as most of ‘Earthling’ and tracks from it like ‘I’m Afraid of Americans’, ‘Little Wonder’ and ‘Seven Years in Tibet’ , all of which I enjoyed.

The drum and bass set even got the thumbs up from me, but it was intolerably loud. I had to move to the back of the hall and I was in a fair bit of pain, but I couldn’t understand why. Looking up at the wall, I could see the picture frames on it literally rattling with the noise levels and it was then that I realised. It was the recently inserted metal plate within my aching leg rattling against my bone. I was in absolute torture but going nowhere. Not a chance. A couple of people come up to me and asked if I was okay as I didn’t look very well, but I thanked them for their concerns and declined assistance. There was still more, even a ten minute version of Laurie Anderson’s ‘Oh Superman’ sung by Gail Ann. My favourite moments if pushed were ‘Scary Monsters (and Super Creeps)’ and the brilliant ‘Jean Genie’. There was over three hours of vintage Bowie, which was absolutely untouchable. A bit like my leg for the next few weeks!