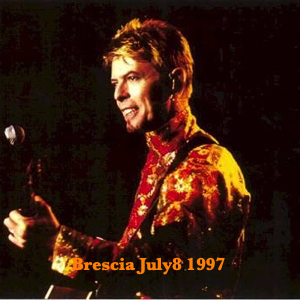 It didn’t seem too ambitious at the time. David Bowie, London geezer of true legend and genuine musical stature, sets off on a European tour in 1997 and pencils in a 25,000 capacity stadium as his only date in northern Italy. No bother to him to pack it out, n’est ce pas? Well no actually. It would seem that, among the impeccably dressed Italians, the Thin White Duke is held in an esteem a lot lower than in Northern Europe – by the time the day of the gig rolled around only a paltry 7,000 tickets had been shifted.

You’d have expected the decent thing to be done and the gig to be cancelled or at least the venue downgraded for something more intimate, but no, this, it must not be forgotten, was Italy. The wisdom of the promoter saw that the stage was set up right on the lip of the sideline under the shadow of the main stand and in effect rendered the whole football pitch the backstage area. For the punters it provided the strange, but welcome, experience of turning a stadium gig into a cosy intimate affair. One of the better Italian ideas.

Mansun opened the show with a set pulled almost exclusively from their curiously overrated debut album Attack of the Grey Lantern. Largely ignored by the audience, they only managed to elicit a response with a performance of The Chad Who Loved Me that seemed to strive for the status of ‘epic’. In reality it is one of those tunes that hides its inherent ordinariness behind a swathe of orchestral strings.

The tickets might not have done the running-out-the-door thing, but it certainly didn’t phase Bowie who, strolling out in some outrageous flowing Asian threads, started his set with a totally unexpected ‘Quicksand’ from 1970’s Hunky Dory album. All the Young Dudes and Jean Genie completed a great opening hat trick before he delved into the material from the Earthling album.

The criticisms from the drum’n’bass fraternity in the UK that greeted this album were not in evidence that balmy July evening. Bowie and his tight band performed the new material with a confidence and enthusiasm that wasn’t going to make the sallow skin of the locals blanch. But then again the argument goes what would they know, this being the country that considers local boy Robert Miles a vital contribution to cutting edge dance music?

As dusk fell, Bowie’s indulgent love of mixing different media began to manifest itself. Projected images lit up a huge white cotton sheet behind the band. It was not quite Popmart but, to be honest, it did help while the time away during the performances of the constipated material from his 1995 Eno produced Outside album. Nonetheless his use, during a particularly painful and technofied Hallo Spaceboy, of graphic scenes from porn flicks was a bit too indulgent. It certainly wasn’t appreciated by a Bowie fan friend who, bringing his 9 year old son to see his father’s legend in the flesh, got a bit more flesh than he bargained for. But then again, maybe it was a ploy Bowie’s subconscious offered as a distraction from the simple awfulness of the track.

His recent years may have thrown up a few suspicious musical diversions (let’s not even mention the Glass Spider tour) and shady attempts of piggybacking the musical zeitgeist. Yet all it took was one performance of Heroes to restore the faith and remind us that this was the man that fell to earth and saved the seventies.
Eoghan O’Neill